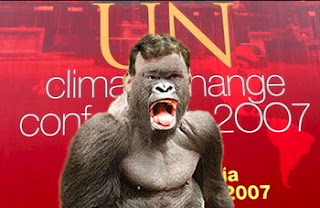 The Star : No climate deal without U.S., Baird says.
Shorter Baird : If we don't succeed in finding new excuses to continue trashing the environment, ultimately there will be no economy left to worry about.
As other nations discuss whether the Climate Change Conference in Bali will be successful in getting "rogue nations like China and the US to sign on to real targets", Canada throws up roadblocks to progress. Well, not Canada exactly, just our government according to Germanwatch :

"China's ranking on Germanwatch's 40th annual index, which ranks 56 industrialized and emerging countries, was an improvement of four places over last year, the group said Friday.
The United States and Saudi Arabia were the worst on the list, at 55th and 56th places, respectively.
Canada placed 53rd on the list, down two spots from last year's survey. It has prompted concern that the country lacks credibility on the international stage."

Ya think? In preference to Kyoto, "Baird uses the 1987 Montreal Protocol on ozone-depleting substances as an example of what the world should strive for. "
Sure, let's ban hairspray again - we were great at that! But wait :
Matthew Bramley, director of the climate change program at the Pembina Institute, said :

"The Germanwatch ranking was developed by analyzing each country's emission levels, emission trends, and greenhouse gas reduction policies and combining the information to create an overall climate change performance target.
While Canada placed 46th and 43rd in terms of emission levels and trends, its governmental policies were ranked 55th, making them the second-weakest in the study.
"The people that compiled the whole survey have explained to me that if Canada substantially strengthened its policy, it could rise as much as 20 places in this ranking," he said."

That'll be our job - getting rid of these hairspray policy activists.
Posted by Alison at 7:35 am
Email ThisBlogThis!Share to TwitterShare to FacebookShare to Pinterest
Labels: Baird, Bali, Environment, Kyoto, Pembina Institute

The lovely pic of mr. baird: (Kudos on that one, Alison!)

Is that him screaming in the House of Commons about how "Canada's 'New Government'(TM) is so much better than the government of the previous thirteen years!" ?