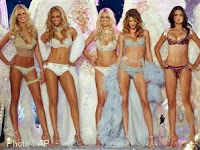 The annual Victoria's Secret Fashion Show is on tv right now.
M-m-m-m ....soft core pron.
Here's a little Victoria's secret for you - it takes a slave only 3.3 minutes to make each of these bikinis.
Of course the alternative of being beaten or jailed in Jordan is probably a big incentive to keep up.

Each Sri Lankan or Bangladeshi "guest worker" lives and works in a Victoria's Secret sub-contract factory compound in Jordan named D.K. Garments. They work 15 hours a day 7 days a week with mandatory overtime and a day off once every three or four months. They are regularly cheated out of their wages. The dorms in which they are housed lack both heat and hot water even though the outside temperature drops to zero in winter. Since their passports have been confiscated, they cannot leave.

According to The National Labor Committee, after a recent demand for a 43% increase in production with no raise in pay, six very brave workers went on strike.
On Nov 11, they were imprisoned and the next day their co-workers went on strike in protest.
D.K. Garments threatened to cut off food and water to the dorms.
The workers held out for 10 days but are now back at work under the same conditions. The original six strikers remain in prison.

Amazingly, these people paid from $1,500 to $3,000 to purchase the three-year work contracts in Jordan.
Now, in debt from borrowing the money to pay the contract fee and with their passports confiscated, they can't leave.

By the way, the workers' wages amount to less than 3/10ths of 1% of the $14 retail price of one of those bikinis pictured above.
Enjoy the show!

to demand the end of this abuse and the release of the six strikers from prison.
Be sure to mention that you won't be buying any of their products because in real life, evil is just not all that sexy.

thanks for the info, alison. sure glad i'm not a victoria's secret kind of gal....more like gertrude's announcement.

just discovered your excellent blog and sent this piece out to my networks - thanks.

This is disgusting. There's so much abuse of foreign laborers in the Middle East.

Canadian rival La Senza was bought by these abusers for 710 million a few weeks back and La Senza's stock has doubled.

hi Q! i never knew la senza was bought out by VS. what, you own shares or something ;)

Google is there to research the many little things you love ;)