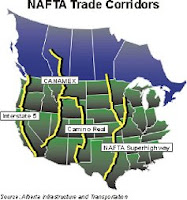 Once upon a time it was called a mere myth, a conspiracy theory apparently believed only by paranoid nutters :


"The so-called NAFTA superhighway - a massive, 12-lane road, rail and oil-and-gas corridor that would snake from western Mexico, through the United States and into Canada, making it far easier and cheaper to import Chinese goods, thus completing the final destruction of the American and Canadian manufacturing sectors.
Of course there is no NAFTA superhighway, and no plans to build one, any more than there is any serious talk of a North American Union. "

Why, even NASCO, the North American SuperCorridor Coalition Inc., and previously the biggest booster of the NAFTA Superhighway, says so. From their Facts and Myths page :

Also they tell us : no amero, no NAU, and especially nothing to do with the Trans Texas Corridor and its over blown rhetoric about a SuperCorridor from Canada to Mexico.
Apparently NASCO is just aiming to fix I-35 up a little. And to stop us from bothering them about it, they have taken down this map, which used to grace the frontpage of their website and scare the shit out of everybody : 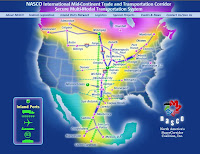 Because nowadays the NAFTA Superhighway is just business-as-usual :

"Number two on the popular US web site Digg is a map of the NAFTA Superhighway on an Alberta Government web site. [Picture at top] Why in the name of free trade are so many people freaked out about this thoroughfare?
Many believe the transcontinental corridor is a myth.....The Ministry of Infrastructure and Transportation web site uses the exact phrase, showing a thoroughfare that begins in Manitoba and drops all the way down to West Texas.
When initially reached for comment, ministry communications director Jerry Bellikka said, “Where’s the secret agenda if it’s on a government web site?" He added that the controversy is a “pretty good example of political rhetoric getting twisted out of shape.”
After some further investigation, Mr. Bellikka reports that the name in question has been on the site for five years and is used to help inform truckers of certain weight restrictions. "We don't see any link between trucking weights and conspiracy theories," he said."

Now if only Manitoba Premier and Hemispheria member Gary Doer would keep up.
Speech from the Throne, Nov. 20, 2007

"Manitoba is also taking a major role in the development of a Mid-Continent Trade Corridor, connecting our northern Port of Churchill with trade markets throughout the central United States and Mexico. To advance the concept, an alliance has been built with business leaders and state and city governments spanning the entire length of the Corridor. When fully developed, the trade route will incorporate an “in-land port” in Winnipeg with pre-clearance for international shipping."

Oh dear. What's he on about?
That would be this : [bold mine]

"On September 19-21, 2007 , the Ports-to-Plains Trade Corridor Coalition hosted the Great Plains International Conference 2007 at the Adam’s Mark Hotel in Denver, Colorado, gathering hundreds of elected and government officials, business leaders, communities and citizens from Laredo, Texas, and the Alberta-Montana border, to examine how to work together to secure the benefits of trade, promote energy security and strengthen trade linkages to western Canada, on behalf of the communities of the Great Plains, North America’s energy and agricultural heartland. The Colorado Department of Transportation and Texas Department of Transportation were co-hosts.

Major events of the conference included: Texas Transportation Commissioner Fred Underwood announced TxDOT would develop financial master plan for the Ports-to-Plains project; Len Mitzel, a Member of Legislative Assembly of the Province of Alberta, Canada’s energy powerhouse and a potential candidate for Coalition membership, spoke on behalf of the Alberta Minister of Transportation, and invited Coalition leadership (including state officials) to Alberta for follow-up meetings.

The Great Plains International Conference was the first formal gathering of three Congressionally-designated north-south High Priority Corridors that, together, form the primary trade corridor serving the states of the Great Plains: Ports-to-Plains (from Laredo to Denver); The Heartland Expressway (from Denver to Rapid City, South Dakota); and the Theodore Roosevelt Expressway (from Rapid City to the Canadian border provinces of Alberta and Saskatchewan).

Ron Covais, President of Lockheed Martin Americas, and U.S. Chair, North American Competitiveness Council, reported upon the recent Montebello Summit of the NAFTA heads of state, and the recent NACC report on the NAFTA Security and Prosperity Partnership (SPP).Two post-9/11 realities dominate NACC activities, he said:
1) After 9/11, international business and homeland security are intertwined; and
2) North American business will increasingly grapple with intense competition from the “BRIC” nations (Brazil, Russia, India and China).
Under the circumstances, it is both necessary and appropriate to have the private sector on the front lines helping NAFTA governments to develop strategies for a secure, prosperous North America.The Great Plains conference helped to demonstrate that the Ports-to-Plains coalition has significant potential as a NAFTA-wide program, embracing interests from Coahuila to Alberta. Coalition staff and leadership have begun planning on next steps to more fully engage U.S. states and Canadian provinces on the northern end of the Great Plains region, particularly those at key connection points at the border, including Alberta, Saskatchewan and Montana."

(end of transcript)
.
Ron Covais, the NACC, the Texas Superhighway model, talk of Alberta's oilsands, eager Canadian politicians from Alberta and Manitoba...doesn't look good, does it?
So far even they admit they don't have the money to pull it off.

Ports-to-Plains President Michael Reeves' boast of "together, we have secured over $270 million to develop, build and improve the Corridor in all 9 Coalition states" is a drop in the Superhighway superbucket.
But with eager beavers like Manitoba's Gary Doer and Alberta's Len Mitzel "who attended on behalf of Alberta Minister of Transportation Luke Ouellette" on board, they are at least a couple of drips closer.
.
From only "a conspiracy myth" to just about "trucking weights" to a trans-border lobby group having the Trans Texas Corridor Commissioner develop a "financial master plan" for a North American Superhighway.

Have another look at that map at the very top again. It's from a Canadian government website.

Six months ago the NAFTA Superhighway was a conspiracy theory but now it's been demoted to a useful tool on a government website.

Wonder what the next "demotion" will be?

Thanks, Alison, for keeping this issue out there!

This has been peculating for a long time. I worked for a guy in Winnipeg in 1996 who claimed that plans for something like this were afoot even then.

With the destruction of the US consumer economic model, I would guess that the NAFTA superhighway is probably less of a burning issue in people's minds right now. That kind of shipping corridor would only be necessary if the US and Canada continued to import large amounts of useless Chinese junk. Going forward, that seems a lot less likely.

I live in TX, a pipeline has been built following the same route as the NAFTA corridor. I know for a fact that it follows the route proposed. Currently it ha traversed over 100mi. Whitehall in Grimes Co. to Groesbeck/Mexia in Freestone/Limestone counties. Americans need to force our(someones) leaders to tell the truth. The fist of FASCISM darkens our horizon.

Remember, during times of conflict all these highways become government roads for the transportation of personnell and supplies - in other words - foreign troops could be easily brought in to enforce the NAU. These routes are perfect for that. Think about the heavy equipment that can be transported on those wide lanes.

These routes are perfect for transporting foreign troops and equipment