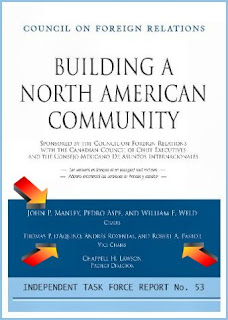 reads the incredulous Jan 30 headline at Embassy Mag, following the news that John Manley's Afghanistan panel report has been down-loaded 160,000 times since its release on Jan 22.
Oh man, Manley must be saying to himself right about now, how soon they forget!
Indeed, who could forget his previous hit best seller, Building A North American Community, written for the US Council on Foreign Relations with Thomas d'Aquino of the Canadian Council of Chief Executives and Robert A. Pastor, self-proclaimed father of the North American Union.
Here - let me refresh your memory with a quote from it :
"The Task Force's central recommendation is establishment by 2010 of a North American economic and security community, the boundaries of which would be defined by a common external tariff and an outer security perimeter."
In fact, right now at Amazon, you can get Manley's first best-seller plus his co-author Robert Pastor's Toward A North American Community, both for the low, low price of $33.48.
It's a steal.
Posted by Alison at 3:20 pm
Email ThisBlogThis!Share to TwitterShare to FacebookShare to Pinterest
Labels: Afghanistan, CCCE, d'Aquino, John Manley, NAU, Robert Pastor, SPP

D'Aquino was on the Current on Tuesday talking about the need for federal and provincial coordination of environment policy. Tremonti savaged him a bit for what amounted to hyprocrisy, which was fun to listen to.

Holly's link to CBC's The Current

Savaged him, indeed! Thanks, Holly.
Particularly enjoyed her wrap-up list of all the oil companies d'Aquino's org represents.
His use of the expression "old speak" was interesting. Apparently it's just plain rude to bring up the bullshit CCCE was spouting earlier this year!