Steve and sandra and the new two-tier torture awareness program 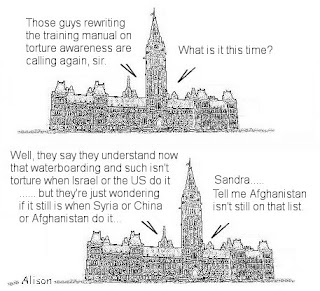 Oooops - NYTimes says it is, Steve. And then Max forgot to give Afghanistan special torture dispensation in his presser yesterday :

Ottawa Citizen : "Foreign Minister Maxime Bernier yesterday disavowed the inclusion of Israel and the United States on an official list of countries where prisoners can be tortured, and said the document would be revised.
"I regret the embarrassment caused by the public disclosure of the manual used in the department's torture awareness training," Mr. Bernier said in a statement.
"It contains a list that wrongly includes some of our closest allies. I have directed that the manual be reviewed and rewritten."

Silly civil servants. Why can't they keep up with who our allies are?
Luckily, Max is gonna fix it with his new two-tier torture awareness program.
Posted by Alison at 8:07 am
Email ThisBlogThis!Share to TwitterShare to FacebookShare to Pinterest
Labels: Afghanistan, Steve and Sandra, torture


I thought you wrote two TIARAS.