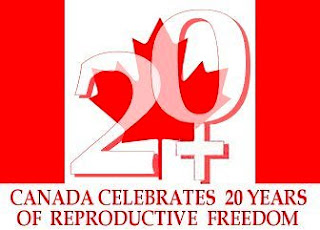 Twenty years ago on January 28 1988 in R.v.Morgentaler, the Supreme Court of Canada ruled the jurisdiction of the state over women's bodies was unconstitutional.
Justice Bertha Wilson wrote :
"The decision whether to terminate a pregnancy is essentially a moral decision, a matter of conscience. I do not think there is or can be any dispute about that. The question is: whose conscience? Is the conscience of the woman to be paramount or the conscience of the state? I believe, for the reasons I gave in discussing the right to liberty, that in a free and democratic society it must be the conscience of the individual."
So there you have it : In a free and democratic society, the conscience of the individual is paramount.
CBC reports that some fetus fetishists, who presumably hope to one day celebrate the supremacy of the state over the individual here, have attempted to mark the occasion by selling anti-abortion billboard ads for buses and shelters in St John's, Fredericton, and Hamilton. The ad was declined on the grounds that it was misleading.
It reads :

"Nine months… the length of time an abortion is allowed in Canada. Abortion.
Have we gone too far?"

Yes, fetus fetishists, I'm afraid you have gone too far this time.
A fetus becomes viable at around 20 weeks, no?
According to Statscan, the percentage of Canadian abortions performed at the 20 week mark in 2003 was .7% or 0.007. That's point double-oh-seven.
OK, let's try that one as a billboard ad instead :

" .007...the percentage of abortions performed at 20 weeks for medical reasons in Canada."

Yes, I think that would more adequately meet the stringent truth-in-advertising requirements of Metrobus in St. John's, Nfld.
Good luck with it!
And Happy Anniversary, everyone!
UPDATE : Great round-up of the 20 year celebrations from Hope and Onions
Posted by Alison at 1:23 am
Email ThisBlogThis!Share to TwitterShare to FacebookShare to Pinterest
Labels: abortion, Bill C-484

Hey The Toronto Star used your Canadian flag banner at the top of their piece on the 20 year anniversary, and they quoted you too.
The Star

I love it that we have no abortion law at all in Canada.
And how come the same people who want to ban abortions are against daycare and contraception and sex education, huh?

Ali : That's Antonia Z, Star columnist and a great blogger. She disappeared for a while but now she's back!
I put the banner up at Bread 'n Roses for anyone who wanted to use it.

Oddly the same people are often pro-death penalty too.
They like the idea of life; just not the actual stuff of it.

Thanks so much for the link, Alison.

And thanks for the banner/image, too!