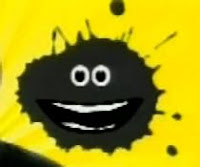 Hi! I'm Splotchy, the Con's new talking oilspill mascot.
Look for me on the little tv screen where you gas up at the pumps.
Or not.
.
Hey, that's not fair! We have a contract through Retail Media Inc.!
.
... Retail Media Inc ... Retail Media Inc...
Hey I remember them! That whole in-and-out thingey ...
"According to a sworn affidavit, executives with Retail Media Inc., the Toronto "media buying" firm for the Conservatives, balked when investigators showed them an invoice on the company's letterhead.
The executives "didn't recognize" the invoice, similar to that filed by about 15 Conservative candidates among 67 from the 2006 election seeking more than $825,000 in taxpayer-funded rebates.
Marilyn Dixon, chief operating officer, suggested the invoice "must have been altered or created by someone" because they didn't look like the ones her firm submitted to the Conservative Party of Canada.
Now, the party is under investigation for filing returns with Elections Canada "that it knew or ought reasonably to have known contained a materially false or misleading statement" on advertising expenses."
.
But never mind that. Or Bernier's security breech. Or what Con operatives offered the dying Cadman. Or that we dismissed the vote passed by opposition parties calling for a cut in greenhouse gas emissions by 80% from 1990 levels by 2050. Or the leak to the press that Obama/Clinton didn't really mean their campaign statements to reopen NAFTA. Or the new softwood lumber penalties. Or our refusal to repatriate Khadr. Or the travesty that is the Toronto terrorist 18, scratch that, 11 trial. Or our continuing participation in Operation Enduring Freedom. Or regressive immigration practices shoved into a budget bill. Or the proposed treaty with the murdering Colombia regime. Or the SPP and sucking up to Bush.
Never mind all of that.
Just keep your eyes on this simple message to you :
TAXES ARE BAD. DION IS NOT A LEADER.
.
Posted by Alison at 3:34 am
Email ThisBlogThis!Share to TwitterShare to FacebookShare to Pinterest
Labels: Cons, Kory Teneycke, Oily the Splot, Spin

The Cons' strategy is clear. They intend to have so many scandals, that a voter can't possibly pick just one to get really upset over. Then they'll whisper "Adscam" into a crowd, and take another minority. That's the ticket!