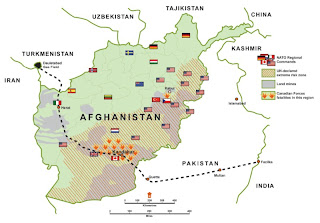 If asked, Canada would help the Afghan army defend a proposed $7.6-billion U.S.-backed natural gas pipeline running from Turkmenistan, through Afghanistan, to Pakistan and India.
We've heard about this pipeline before. A bidding war for the contract between U.S. Unocal and Bridas of Argentina ended when the Taliban pulled out of negotiations just one month before the U.S. invaded Afghanistan. Afghan President Karzai, who either was or wasn't previously a Unocal employee, signed an agreement with the Turkman president this April to begin construction of the pipeline in 2010. Named TAPI after the four nations involved, it will run straight through Kandahar where Canadian troops are slated to stay till at least 2011.
Energy economist John Foster has written a report for the Canadian Council of Policy Alternatives, questioning the motives of the countries involved and outlining three reasons why the US wants it :
1) To limit Russia's influence in the region. Turkmanistan currently exports nearly all its gas to Russia.
2) To isolate Iran and their proposed rival pipeline that would run from Iran to India and Pakistan.
3) To forge links with India that would isolate India from China, who have already begun
their gas pipeline from Turkmenistan east through Kazakhstan to China.
Is this why Canada is in Afghanistan?
G&M : "Liberal Senator Colin Kenny - chairman of the Senate's national security and defence committee - said Canada has similar interests in the global energy market as the United States, and should not shy away from supporting U.S. geopolitical objectives. "I don't think we would be serving Canadian interests if we were ignoring American interests," he said."
John Foster says he wrote his report to foster debate about pipeline politics in the absence of any official statement from the Canadian government :
A PIPELINE THROUGH A TROUBLED LAND: AFGHANISTAN, CANADA, AND THE NEW GREAT ENERGY GAME
A very interesting read.
Posted by Alison at 11:14 pm
Email ThisBlogThis!Share to TwitterShare to FacebookShare to Pinterest
Labels: Afghanistan, Karzai, Taliban, TAPI

Well, from a business model point of view, our troops will almost certainly be a heckuva lot cheaper than all those Mercs from Blackwater.

I honestly think the oil pipeline is a sideline to what is part of an over-all plan to have a guaranteed base for US planes and etc. to project their power in the region.

So, yeah, the pipeline will do all those things you talk about in the post, but it isn't the main reason, or even a large reason about why we're there.

Sucking up to the US so that Martin or Harper could/can get invited to Washington is why.

All same, Thwap. The power, the sucking up, the oil and gas revenue, the regional
influence, the re-ignited cold war...