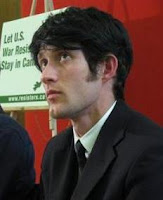 "immediately implement a program to allow conscientious objectors and their immediate family members...to apply for permanent resident status and remain in Canada; and...the government should immediately cease any removal ordeportation actions...against such individuals."

Sgt. Corey Glass has had his application to stay in Canada rejected and now faces deportation, making him the first Iraq war resister to be deported from Canada. He could be deported as soon as June 12.

Today at 3 p.m., parliament will vote on a motion to support U.S. Iraq war resisters in Canada.

The NDP motion calls on the Government of Canada to stop deportation of those who refuse to fight in Bush's illegal war. All three opposition parties have indicated their support, but then again there has been that business of sitting on hands when it's time to vote.

Anyone who didn't heed Laura's call to arms yesterday can still phone or send along a little note to their MP telling them you expect them to show up and support the motion. Use your inside voice.

As Laura says :"
It is very painless! You can say something like "I live in ____ and I'd like to leave a message for _____." (Sometimes the first person who answers has to transfer you to someone else.)
Then say "I'm calling to urge ______ to _____."
The person on the other end is always friendly and will say nothing more than "thank you for calling, I'll pass on your concerns".
You don't even have to leave your name if you don't want to."

And don't forget to cc Steve :

Good for Canada in passing the legislation! Screw the damned War!