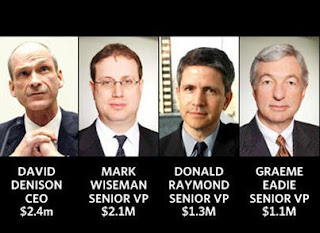 The Star : "Four top executives of the Canada Pension Plan Investment Board pocketed nearly $7 million in bonuses this year despite losing $24 billion of taxpayers' money in bad investments, according to the board's annual report released yesterday. Their investments lost 18.6% of their value. "
Plus as NUPGE reports, "they are due another $7 million in long-term awards that will be paid out over the next three fiscal years."
This is on top of their salaries, of which Dennison's is almost $½-million a year, compared to Stephen Harper at $315,400 a year and the average CPP retirement benefit for Canadians at around $6000.
CPP Investment Board chair Robert Astley explains that the size of these bonuses ... wait for it ... "enables us to compete for talent within the private sector world of capital markets."
.
Hard to believe, isn't it?
I mean, as Canadians we have millions of our hard-earned dollars invested for us by CPP in war profiteers like Halliburton, Raytheon, Northrop Grumman, and Lockheed Martin, not to mention Monsanto, Walmart and the US tobacco industry, and yet somehow the CPP comes up short.
You would think the war on terra would pay better, and not just to CPP CEOs.
Say, whatever happened to those Principles for Responsible Investing CPP proudly signed onto with the United Nations Environment Programme Financial Initiative (UNEPFI)? Are cluster bombs and land mines mentioned on there somewhere?
.
Saturday Update from Progressive Economics : The tortoise and the Hare

"Before the CPP Investment Board was created, Canada Pension Plan savings were invested entirely in government bonds. Canadians were told that we could make higher returns on these savings if they were invested in the stock market and in private investments instead.

Out of interest, I calculated what these returns would have been if the initial investment had been left in government bonds and if these funds and all the further net transfers to the CPPIB had been reinvested in long-term government of Canada bonds at their yield for each year since 1999.

These calculations show that leaving these investments in long-term bonds would have earned about $36.5 billion over the past decade: $13 billion more (and 50% higher) than the CPP Investment Board earned."

We'd have been better off both ethically and financially if public pensions had continued to be invested in public debt.
.
Posted by Alison at 5:39 pm
Email ThisBlogThis!Share to TwitterShare to FacebookShare to Pinterest
Labels: Canada Pension Plan, corporate welfare, land mines, war on terra, warmongers

This is soooo WRONG!!!
Why do we allow it?
We have food banks asking for more donations. They can't keep up with the demand.

Are we Canadians getting what bush II only tried to inflict on USians?

I'm too complacent for my own good.