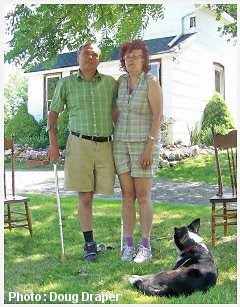 A 57 year old amputee has his artificial leg ripped off by police because he can't stand up quickly enough for them from where he's sitting quietly on the grass with his daughter at Queens Park.

"As Sarah began pleading with them to give her father a little time and space to get up because he is an amputee, they began kicking and hitting him.
One of the police officers used his knee to press Pruyn’s head down so hard on the ground, said Pruyn in an interview this July 4 with Niagara At Large, that his head was still hurting a week later.

Accusing him of resisting arrest, they pulled his walking sticks away from him, tied his hands behind his back and ripped off his prosthetic leg. Then they told him to get up and hop, and when he said he couldn’t, they dragged him across the pavement, tearing skin off his elbows, with his hands still tied behind his back. His glasses were knocked off as they continued to accuse him of resisting arrest and of being a “spitter,” something he said he did not do. They took him to a warehouse and locked him in a steel-mesh cage where his nightmare continued for another 27 hours."

No phone call, no reason given for his arrest, no charges laid after 27 hours.
.
Photographer Dylan Leeder was there and blogged it :

"Throughout the day I saw a few things that I wish I never had to see. One man, an amputee, was even torn down by his neck (where they aimed for), beaten, and then had his prosthetic leg ripped off only to be arrested."

John Pruyn, a Revenue Canada employee, wonders if the idea of the crackdown was to send a message to the public at large that gatherings of opposition to government policies won’t be tolerated.
.
h/t Antonia Z.
.
Update : Media response
NaPo : G20 police 'yanked' off prosthetic leg
Sun : Who will stand for amputee?
The Shotgun : The time for excuses is long over
.
Posted by Alison at 4:50 am
Email ThisBlogThis!Share to TwitterShare to FacebookShare to Pinterest
Labels: G20, police brutality, Public Works Protection Act

I don't care what their orders were, how low do you have to be as a human being to beat up a 57 year old amputee sitting on the ground?

I hope someone puts him in touch with G20 Justice.

I think my biggest worry about all this is that action won't be taken to prevent a repeat. Justice not done is a corrosive thing. The police brass will close ranks around their sadists because that's what they do, good police will quit in disgust and disillusionment, and there'll be bodies in the streets at the next time.

Anon : Looks like there will be some sort of independent review of police tactics during the G20 protests. Well, let's see if they have the guts to come up with someone like Paul Kennedy to head it. What I don't understand is how the Toronto Police Board will have any jurisdiction over police seconded to G20 from right across the country but .... developing, as they say.

Boris : Yeah. I'm also concerned that the way they are going, eventually they will only be able to attract droogs to sign up.
Brilliant piece you did on this btw :
Catalytic overhaul

Interesting that your Global link has John Wright, Senior Vice President of Ipsos Public Affairs, give what appears to be his personal opinion that "the police response was balanced".
I'd need to see how the poll was conducted to judge it but if the question was about the day the police stood down while trashers broke windows then yes, a response that they did not go far enough would be entirely reasonable. I've seen a couple of polls already that do not differentiate between the first day of complete police inaction and the following day of police over-reaction - which just hopelessly muddies things up. Pollees need to know which day they are being asked about.