Inside the Subcommittee on Human Rights 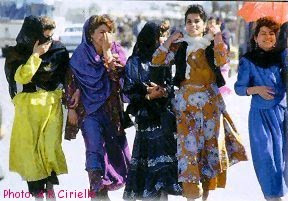 Photo : Afghan women students at Kabul University, 1995.
.
Speaking to his fellow members of the Subcommittee on International Human Rights on Tuesday at a meeting which heard that the situation for Afghan women has considerably worsened over the last two years, Lib MP Mario Silva recounted his own conversations with womens groups in Afghanistan this past June :

"They told us when they were young, they had full freedom in terms of education, they didn't have to wear the head scarf, they could go out in public without any problem. It was more restricted with the Taliban but they did have more progrssive attitudes towards women some time ago so I think when we in the West say we have to be culturally sensitive to them and it takes time - I think that is a false argument."

He stated that that all the womens groups told him that concessions to the Taliban were won on the backs of women, that they strongly opposed the Karzai government, and that continued Canadian presence in Afghanistan was important to them.

The only witness Tuesday was Reverend Majed El Shafie of the Christian Toronto-based human rights group, One Free World International.

He testified that while working in Afghanistan four years ago, he was able to connect with local human rights orgs and individuals through their networks but in the last four years, and specifically in the last two, reports indicated the human rights situation is much deteriorated, so in June he returned with the delegation that included committee member Lib MP Mario Silva.

Number one - the severe abuse and shocking punishments meted out to women, abetted and sanctioned by the new 2009 laws passed by the Karzai government before the last election.

Number two - Boy play or "bacha bazi" - sexual slavery in which boys are dressed up to dance as girls and afterwards whoever pays the most gets to rape the boy. Members of the government take part, says El Shafie, and some boys are raped six to eight times a day, including by the police if they complain. He has video.

Number three - Persecution of 25 Afghans converting to Christianity, including calls for their deaths by members of parliament, backed up by Karzai's spokesman, the deputy secretary. El Shafie tabled the document authorizing them being stoned to death.

He recommended future Canadian aid be tied to preconditions on human rights improvements.
Although he testified that "our support of Karzai and the corruption of his family is what is negatively affecting our image" to the Afghan people, he made a passionate plea for Canada not to abandon them, to stay on in Afghanistan.

The committee met hours before the defeat of the Bloc motion condemning the Conservative government's extension of the Afghanistan mission without a parliamentary vote.

There is a notable lack of partisan party bickering on this seven member committee - possibly because a majority of them also work together on the Steering Committee of the Canadian Parliamentary Coalition to Combat Antisemitism (CPCCA). Scott Reid is Chair of both, Mario Silva is Vice Chair of both, and Irwin Cotler and David Sweet are members of both. So the Steering Committee of the CPCCA holds a majority on the human rights committee.

This also perhaps explains why human rights abuses perpetrated on Palestine/Gaza do not show up anywhere on their radar. Rather unusual for a human rights committee, no?
.
Posted by Alison at 4:36 am
Email ThisBlogThis!Share to TwitterShare to FacebookShare to Pinterest
Labels: Afghanistan, CPCCA, Feminism, Karzai, Mario Silva, Scott Reid, Subcommittee on International Human Rights, Taliban

Tut, tut, tut. Any moment now the Afghan ambassador to Canada will awake from his nap and hold a press conference to announce that Reverend Majed El Shafie is also guilty of falling in traps of some common misperceptions about Karzai and his entourage.

Oh, and please cross-post at TGB or Dawg's so I can vote for it.

Interesting that both committees share the same MPs. It seems that 21st Century Human Rights is far more nuanced than that of the last century.

In an in-depth article re: Canadian Human Rights Museum in this past weekend's Winnipeg Free Press, it was highlighted that certain atrocities are clearly recognized as human rights abuse but others are more complex and require discussion: Palestinians, LGBT (read SSM), Aboriginal people (assimilation tactics) and Gender (read "abortion"). Seriously, these are the examples given by CHRM staff.

Back to women in Afghanistan, did El Shafie and Silva meet with RAWA? They certainly don't want any foreign military presence.

Lots of political chatter about Karzai thanks to wikileaks and Harper claims that Karzai being corrupt is widely known so no big deal. Am I dense or does this not clearly demonstrate that the last thing we should be doing is building this crook an army and police force? Are there regime change plans underfoot? If so, does that not negate the so-called nature of the extended mission?

Cross-posted at Dawg's now, dBOs. Thanks. I was surprised that the committee appeared to be so horrified at El Shafie's admittedly extremely graphic testimony. Where the hell have they been?
At the following meeting yesterday they grilled the DFAIT witnesses about it, but I note their questions mainly centered around boy play and the persecution of Christians - the wimmins not so much.

BY : RAWA was not mentioned at all but they did meet with Dr. Sima Samar, Chair of the AIHRC and latterly of our own beleaguered Rights and Democracy Canada. She told them that after her meeting with Karzai to protest his new laws punishing women, he went ahead and passed them anyway.

Re corruption. Well obviously we should be funding RAWA and local NGOs there instead of warlords and villas in Dubai, but somehow I can't imagine Harper trading in his yellow ribbon for one that reads : "Support the NGOs".
A point raised by El Shafie was that NATO and the UN declined to insist on a redo of Karzai's last election - which in his opinion Karzai clearly lost. So much for bringing democracy to Afghanistan.
I read this morning that Karzai only wants US troops there now.