In a four page 2008 cable, the American Embassy in Ottawa analyzed the increase in "anti-American melodrama" on Canada's "state-owned" television. 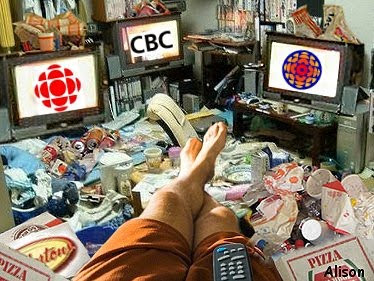 "Yeah. Special Agent Joe here."
.
"Hey Joe, you finished that report on the changing dynamic of Canada-US relations yet?"
.
"Just about."
.
"Just about? It's been six months already and I'm looking at your $20,000 room service bill here. Wtf's going on up there?"
.
"It's complicated, sir. Things are at a very delicate stage. Did you know there's a CIA plot to secretly divert Canadian water to the southwest?"
.
"Well, former ambassador to Canada Paul Cellucci mentioned it once - something about aquaducts - but I don't think it went anywhere."
.
"Tell that to the state-owned television station up here. In just the last three weeks a Syrian terrorist with a belt full of explosives was taken off a plane but unfortunately it was the Canadian-Syrian man sitting next to him who was rendered by CSIS and the CIA to Syria."
.
"I haven't heard anything about .... Are you sure about this?"
.
"Oh yes, sir, I read about it in the National Post."
.
"Good God."
.
"Then one of our rendition aircraft with three terrorist suspects on the "Guantanamo to Syria express" crashed in Quebec and the terrorists escaped. Luckily an arrogant, albeit stunningly attractive female Homeland Security officer, sort of a cross between Salma Hayek and Cruella DeVil, has arrived to sort it out."
.
"Have you made contact with her yet?"
.
"Not exactly, sir. She hasn't returned my calls. Her agent was quite rude to me actually and he isn't even a special agent."
.
"Be careful, Joe. We don't want to start up any interdepartmental turf wars. Is there anything else you need?"
.
"Another television would be a big help, sir. Sometimes reruns of The Border come on in the afternoon at the same time as Little Mosque on the Prairie and I can't keep up."
.
"Of course. Whatever you need. After all, it's a matter of national security."
.
.
OK, you know what really is funny? The original report from the US Embassy in Ottawa, complete with Selma Hayek/Cruella DeVil references.
.k, you kno what really
Posted by Alison at 3:51 am
Email ThisBlogThis!Share to TwitterShare to FacebookShare to Pinterest
Labels: Canada-US border, CBC, Paul Cellucci, WikiLeaks

Someone get Special Agent Joe a radio so he can do embassy reports on CBC's Afghanada as well. Fuck I hate that show.

They missed out on one connection; that the star of H2O had previously infiltrated the US disguised as a mountie.

Oh yes, sir, I read about it in the National Post
;)

A couple more commentators who have interesting points to make:

And Jaime Weinman sees the report as mainly a fund-raising pitch:

"The Border" was such a sh*tty show so I give special agent/TV critic Joe kudos for getting it cancelled :-)

Now "Intelligence" is another matter altogether. I'm with Doyle - that was an incredible series that was inexplicably axed.

I have to say I liked the Border and Intelligence and most Canadian dramas. I dunno if I lack critical faculties or am just reflecting my early indoctrination by CBC.

Intelligence was better, though you had to think harder to follow it.

Thanks, Holly Stick. Added your "the star of H2O had previously infiltrated the US disguised as a mountie" to crosspost at The Beav.

Confess have not watched any of these shows, BY - ok, Intelligence a couple of times - just thought the idea of some aspiring embassy intel sort stuck in a hotel doing deep cover tv reviews for months was funny.

Murray Dobbin and Chris Haddock were both convinced at the time that Intelligence was first not promoted prior to release, then never mentioned, then canned, because of chickenshit feather ruffling qualms.

Intelligence did draw stories from current reality (like Haddock's Da Vinci's Inquest did). I seem to recall a fictional counterpart to Blackwater being mentioned, though I don't know if they developed that story line very far.