A smiling Daniel Ellsberg is led off to jail 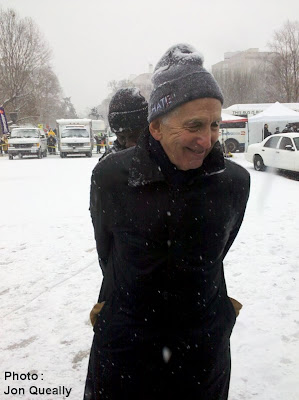 The famous Vietnam war whistle blower, now age 79, was arrested in the snow today after chaining himself to the White House fence to protest efforts to prosecute WikiLeaks Julian Assange and Bradley Manning as terrorists.
.
"I have no doubt if I put out the Pentagon Papers in every detail, same as before, I would now be called a terrorist," said Ellsberg, whose leaks 39 years ago helped to turn public opinion against the Vietnam war.
.
About 135 demonstrators were arrested at the protest organized by Veterans For Peace, including journalist Chris Hedges.
.
Against this man's heart, your cynicism is as nothing.
.
Peace now.
.
Posted by Alison at 11:20 pm
Email ThisBlogThis!Share to TwitterShare to FacebookShare to Pinterest
Labels: anti-war protest, Bradley Manning, Daniel Ellsberg, Julian Assange

I'd include Mr. Hedges' also

Telling the truth is now a revolutionary act...

It's alarming how the press is virtually ganging up on whistleblowers. From Wired to Huffington Post, the misinformation and indignation over WikiLeaks is appalling.

Why aren't journalists respected anymore? Why don't people pay any attention to not just mainstream media but even the most prominent blogs? It's crazy. Q said it. Truth is revolution and journalism is the the new authoritarianism.

"Against this man's heart, your cynicism is as nothing."

I'm wondering if you've silenced yourself by writing such a singular powerful line. Those words have silenced, provoked and shamed me.

I await more from you; for what you write is vital.

Hi there. I'm a friend of Alison's. I'm sorry to report that she is seriously ill.

Sorry to hear that, I was wondering where she went.
Happy New Year Alison! Get well soon.

Best wishes, Alison, I hope you are better soon.

Thinking of you Alison and wishing you a speedy recovery.

All my heart and best thoughts are with you, Alison -- I hope you're better soon.

Recover soon and my best thoughts your way Alison. *hugs*

This is terrible news, which I just heard. My strong hopes for a full recovery in the New Year. My thoughts are with you.

Hey Alison - Hope you're back running on all 8 ASAP! Good health vibes coming your way from the island.

yeah, what the rest said goes double for me, get well soon!

Heal!! I call on the demon within you to depart and I call on you to heal!!

Seriously, get well, Alison. Take your time and get well.

Do get better soon. Thoughts are with you.

Just read over at the Beaver that you had pneumonia but are recovering -- so glad to hear this. Sending good thoughts your way for 2011.

Hope your recovery is progressing well. This blog is one of my regular stops, love your posts.

That's what my neighbour says when she walks through the door unannounced.

Hope you're getting stronger!

May you get well soon Alison.
Your insights and humour are greatly missed.

Glad to see you're writing again.