The Treasury Board President of Gazebos and Funny Funneling 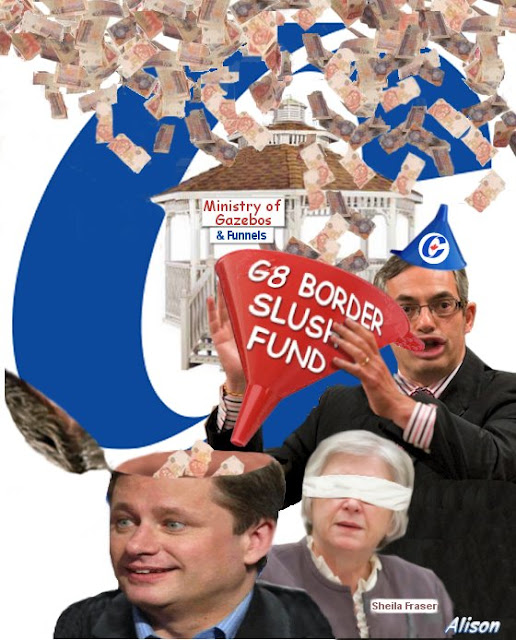 Steve was evidently so pleased with ShamWow Tony Clement's ability to put one over on Auditor General Sheila Fraser by leaving no paper trail of the funneling of $50M of our tax dollars through his own riding office - money purportedly intended for G8 border security - that right after the election Steve made him the boss of all our money - President of the Treasury Board - responsible for ethics, transparency, accountability, and the financial and administrative management of government.

Collateral damage : the compromising of public servants from the Department of Foreign Affairs, Industry Canada, and Infrastructure Canada who may or may not have helped him do it. Now we'll never know. Certainly they denied their involvement to Sheila Fraser but they were there at the meetings with ShamWow Tony, the mayor, and the manager of the Deerhurst Resort when - as Minister of Pork, Gazebos, and Funny Funneling - Clement recommended 33 local projects to then Minister of Transport, Infrastructure and Accountability John Baird, who approved 32 of them.

According to the new AG John Wiersema, apparently having a majority means never having to say you're sorry.

Omigawd, that collage is too, too funny!

And it scarily reflects the Cons' stunts.

BY : Good point. And no wonder given the sorry state of the Public Sector Integrity Office and 'Integrity' Commissioner Christiane Ouimet's abysmal record of enforcement.

DBOs : Thanks. ;-)
It's the breaching and muddying of lines between the Con Party, the executive branch, the legislative branch, and the public service - plus the deliberate circumventing of public accountability - that is the larger problem here, not Tony's private Adscam.