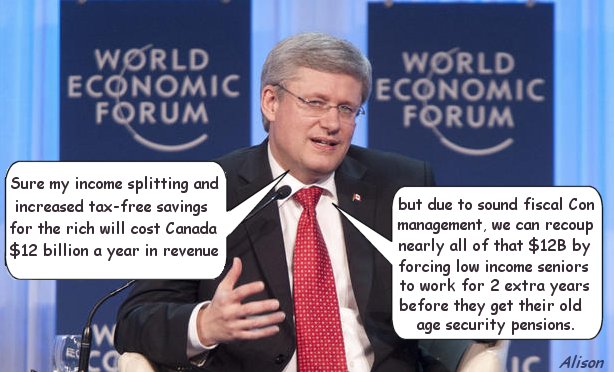 The Jurist explains the math.

While Stephen 'Jets & Jails' Harper did not directly mention raising Canadians' OAS pension eligibility age from 65 to 67 in his SOTU speech from the Davos 1%-ers bunfest :

"We've already taken steps to limit the growth of our health care spending over that period. We must do the same for our retirement income system."

... Con house organ the National Post cranked out three  articles  this month stating the Cons are considering it.
PMO Office today: "Fact: If we do nothing, OAS will eventually become too expensive and unsustainable"


In other not-quite-$12-billion Con news, Parliamentary Budget Officer Kevin Page estimates the Cons' plan to cut the corporate tax rate from 18% to 15% will cost $11.5 billion in government revenue next year.

And Mound of Sound reminds us in comments that $12 billion is also the yearly amount slashed from government revenues by the Cons 2% cut to the GST.
.
Monday Update : G&M : Research belies PM's warning on OAS

Seems the finance committee heard from six expert witnesses who said the OAS is in fine shape with no need to raise pension eligibility age so the committee's final report reflected this testimony but ...
but there was a dissenting minority report from Cons on the committee advising a pension review so naturally Steve is going with that instead.
Ideology uber alles.
Apparently undaunted by this disclosure, Steve pressed on in the House today with his dire OAS frowny face. Wanker.


You get how this works, right? Steve says burgeoning OAS threatens social programs.
By setting up a false choice between working two more years or having social programs, he gets seniors' consent to up the age eligibility. This course of action is much easier than negotiating with unions or the provinces to get cuts .
.
Posted by Alison at 3:35 pm
Email ThisBlogThis!Share to TwitterShare to FacebookShare to Pinterest
Labels: corporate welfare, OAS, pensions, Stephen Harper the Economist

$24 billion a year in lost revenue due to Harper's tax rewards to corporations, wealthy individuals and well-off family values Canadians - incentives that have not stimulated the economy one iota.

We should add his slate of boutique tax credits to the ledger of lost revenue. Notice how those who can afford to live in $500,000+ homes, especially on one salary while raising kids, don't have to sacrifice much for austerity and get a nice kickback for sending little Johnny and Jill to hockey school or music lessons.

$12-billion. Isn't that the exact amount of federal revenue lost when Harper cut the GST by 2 cents?

Oh my gosh, yes. Thanks for the reminder. Added to post.

This how we need to be framing the debate. Presenting it a one of choices, which choice do you prefer OAS or income splitting etc. We need to convince Canadians that contrary to what they've been led to believe that yes better world is possible if we make the right choices.

Totally agree with you on the framing there, Kev.