At his last Con caucus meeting and presser five months ago, Harper so disliked the grilling he got from media about Nigel Wright's cheque to Senator Mike Duffy and what Steve knew about it - see above - that today he decided to allow only cameras into his pre-throne speech caucus meeting without the accompanying annoying reporters.

The press gallery rebelled, responding that if reporters weren't to be allowed in, then cameras and photographers wouldn't attend either.
No one was surprised when Sun Media broke ranks and bravely stepped into the breach with a:

"Our Sun News cameras were allowed in. You will not see that video anywhere else." 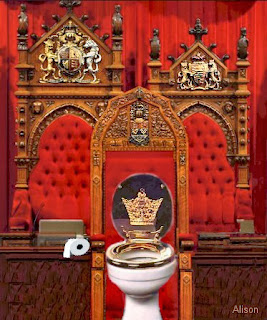 But no worries, Steve sent out the whole speech at 140 characters a pop from the safety of twitter so as not to be entirely left out of Speech from the Throne Day, now affectionately known on twitter as # STFU13 or Shut the Fuck Up Day

Dear Governor General David Johnston :
After you give Harper's speech, don't forget to wash your hands afterwards and put the seat back down.

"You won’t believe what the Press Gallery just did in Ottawa.Some media decided to boycott an important speech by our Prime Minister – one where he laid out his vision for our country, before today’s Speech from the Throne."

The media missed the hilarity of the title of Harper's speech "Seizing Canada's Moment. Yes' Canada's moment and it's economy shall be seized as in a violently stopped engine.

Yes, this speech was so important Steve didn't want any reporters there.

"Seizing Canada's Moment : Security & Prosperity in an Uncertain World" apparently doesn't have anything to do with missing and murdered aboriginal women, youth unemployment, climate change, or electoral fraud.
Go figure.

David Akin argues this was a trap laid for the parliamentary press:

I'm not sure this kind of stunt will help. It looks like the Cons are in a terminal polling zone. Unless he's got plans to suspend or massively cheat in the next election (!), dicking with the press will only serve to hurt him.

I read that from Akin and thought perhaps too cynically it was the only possible rationalization written after journos at other networks had called out Sun News as quislings. OTOH as you can see in the clip in the post, it seemed like it was Akin who led the press rebellion at the previous caucus meeting.

Terminal polling. Cons will eventually implode - barring massive cheating - but even without it, 24% of the voting public can still give Steve another majority so how much does press compliance/complicity matter?
Back in 2006 the parliamentary press gallery staged an actual walkout of a Harper presser as a protest - they got up as one and left.
I seem to be unhappily arguing Akin's point here.

Correction - 24% of the total electorate, not of the % who vote

Well, yeah, but very much less than that, can't.
Akin may be right in a way -- the Cons may be deliberately picking a fight with the media to help them fundraise with a "damn liberal media" spin to their base. But I think that's a tactically sound, strategically stupid approach.

Why? Because the media isn't liberal, it's naturally right wing due to its ownership, but ultimately the personal factor remains. If everyone on the actual staff of all the media hates Steve's guts personally, this will leak into coverage; the Conservative party's lock on generally positive media coverage no matter what they do is not complete. They may be able to get away with nearly any policy, but over time I do think personally pissing off everyone reporting on them will inevitably have an effect.

Hours after DeLorey did his fundraiser plug, Akin bloggs he knew all along that's what the whole thing was about. Sure.

Well, how many people actually watch Sun? They seem to average well below 20 000. Which to me says the impact of Sun only coverage might negligible in generating/maintaining support. The other thing occurs to me is that Conservative supporters have seen their heroes fall from Con favour. There's no doubt some serious pillow whimpering happening. There's no more Reform party for these folks to flee to now so my guess is they'll either begrudgingly vote Con or stay home and angrily drink cheap rye on election day. And I wonder if the corporate owners of the media might also see the Cons as a liability too. At some point all denying the stench of the all those Cons they've hidden in the closets and under bed becomes impossible...


Also, is it wrong to want that gold toilet seat?

Also, is it wrong to want that gold toilet seat?
You don't have one? Where do you put your beer mug when you're in the bath? ;-)

Boris, PLG : Con fundraising stats this year indicate that despite all the scandals, Con supporters still happily hunkered down in the soundproof cheque-writing bunker.
Things could change before next election but I bet many will just rebrand as the anti-Dauphin vote.

Let's hope he takes down Harper & Co. with him!