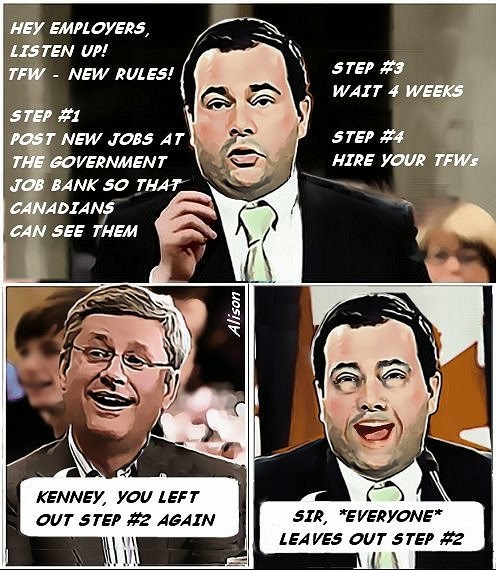 I'll bet you've already guessed what Step #2 is -- replying to the Canadian applicants.

"Employers are required to post job listings seeking Canadian workers first, and leave those ads up for four weeks, before they can be given the green light to hire temporary foreign workers.

"I probably apply for about five jobs a month from the job bank and I have for a few months," said one job-seeker, speaking on condition of anonymity for fear of harming his employment prospects.

"I have never heard a word back from any of the companies I've applied to."

An email address set up by The Canadian Press in recent weeks has also failed to garner any responses from employers when asking for more information about postings in various sectors. One of the jobs included a shelf-stocking position at a Canadian Tire in Red Deer, Alta., that already employs several temporary foreign workers.

Employers need only tell the government that they were unable to find a qualified Canadian after posting their positions on the job bank."


"The number of employees plunged in April to a loss of 46,000 jobs, a figure that was offset in part by the addition of 17,200 self-employed positions.   ....the biggest loss struck the accommodation and food services industry, where 32,200 fewer people found work."

NTFW has set up an interactive map of companies hiring TFWs.
They get their raw data from Employment and Social Development Canada - the same federal department under Minister Jason Kenney that runs the Ottawa job bank at top .
Companies hiring temporary foreign workers in southern Ontario : 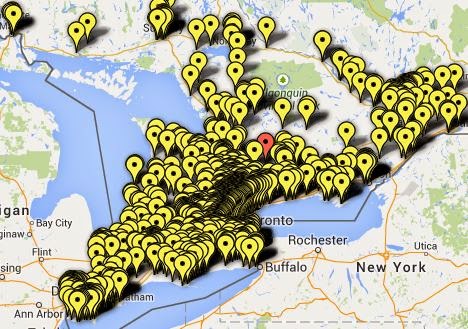 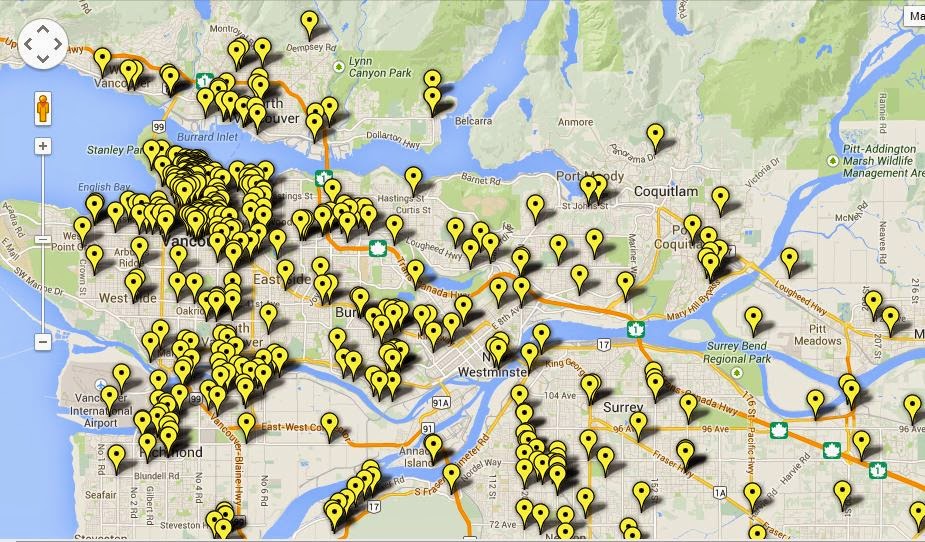 h/t  Jennifer McMackon for CTV link on Ottawa job bank scam.
.
Monday update - left in comments below by the reporter who wrote the CP story at top of post :

"Hey everyone! I wrote that story and would love to talk to people who have heard nothing back when applying for jobs on the job bank. I set up a fake email address and no one has ever replied to me when I have emailed several times asking for more information about various postings. If you have had a similar experience, please email me at

Don Drummond says: "You can't blame it on the employers; it's the government's site. And it would be simple to have protocols in place that removed outdated postings."

And Don is right. It would take maybe an hour or two to write, test and implement a fully automated system to remove outdated job bank postings. But the Harperites seem to like to keep those job bank posting numbers high. Maybe it's political? ;)

I've never heard a word from them either. Of course our system is different here in Québec, but they certainly don't make much more of an effort to remove dead ads.

Admit it mr Kenney .. you have no f'n idea what is going on re Temporary Foreign Werkers .. nor does Stephen Harper.. or the PMO.. or impact on employment for actual Canadians

So .. is that yours or Harper's 'situational ethics' you're defending ??? Or are you being overrun by your own incompetent department ? Or worse.. ignorant of what they are 'accomplishing' ...

Salamander given the fact of who really runs the country and controls the cons and puppet Harper (who is not my prime minister), it is not a shock. Power Behind the Throne: the Canadian Council of Chief Executives @

"Given the mastery which big business now has over the public policy-making apparatus in Ottawa, elected Members of Parliament have been reduced to a role of simply rubberstamping the decisions already made by cabinet in the interests of the big business shadow cabinet."

This big business talking through the cons mouths they don't like minimum wage laws benefits for employees giving full time hours safety in the workplace or treating an employee as an equal and valuable shareholder in their businesses. They want wage slaves who are pleased to toil for less so therefore Ottawa obliges them.

"Why would the government of Canada give public money to already profitable corporations? This practice seems to defy so-called free market ethics." -Morgan Duchesney

See the partial list of who is at the public trough at the same time as receiving tax cuts they are big wealth Canadian corporations and they run Harper inc:

I began tracking the resource job postings. A friend was laid off and so were others, laid off their resource jobs. He was planning to move his family closer to his job site. Good thing he didn't get time to move. A week down the road, he was laid off.

What I see is? As soon as the job post times out, the same job is re-posted over and over. Many job postings don't even have a start date. Many posting dates, just say open.

Foreign resource workers are usually in camps. They have free transportation, they are housed and fed in these camps. They can work at half pay because, the cost of living in their countries, is a fraction of Canada's cost of living.

In one Chinese Province, their minimum wage is $236 per month. That no-where near, even pays your utility bills in this country.

Harper works for the, bottomless pits of greed Corporations. They demand the cheap labor Harper brings over, for them to exploit.

Harper is also, the front man for the NAU. At the last meeting of, the 3 Amigo's.

More telling.
Big business pushing for the NAU
May 18/2011
www.globalresearch.ca

There already is, the European Union. The NAU has been on the books, for quite a number of years.

Read of: Harper gives a speech in New York at the, Council of Foreign Relations. This was Sept 25/2007. Harper fully endorsed the NAU.

This is why, Harper is using every dirty tactic in the book, to stay in office. He wants to play the big shot.

What employer wouldn't want Foreign worker that have their future in Canada held over them, they can't quit, can't get fired, can't complain about working conditions, can't complain about about anything for fear their work permit will be revoked.
Sad that the Conservative government would implement and support such a program that is tantamount to modern day slavery.

Anon@5:55 : Yes, they'd look a bit silly bringing all those TFWs into Canada if their job bank was pared back to actual available jobs, wouldn't they?

Lagatta : According to StatsCan, as of April 2014, Red Deer has 5K unemployed out of a labour force of 122K, so yes you'd think there must be some teenager willing and capable to stock shelves at a red Deer Canadian Tire.

Salamander : Yes, quite likely the Cons' constantly shifting patchwork quilt of damage control labour rules has entirely escaped their control - not that that is necessarily a minus from the p.o.v. of what Mogs would call their bosses.

Mogs : Some great links there. Thanks.
Not sure how far back your interest in the CCCE goes but just over a decade ago, as a further advancement of NAFTA which some of them wrote, the past and present CEOs of CCCE plus assorted Lib and Con finance ministers and a former Quebec premier formed the Task Force on the Future of North America. It called for :

~ a N.A. resource pact allowing greater trade and investment in non-renewable resources, such as oil, gas, and water
~ an integrated N.A. electrical grid
~ a common N.A. currency
~ a N.A. passport
~ a N.A. security perimeter
~ an educational project to teach the idea of a "shared N.A. identity" in schools, and
~ a harmonization of immigration and refugee policies with the US

The vehicle for this was to be the joint Canada/US Prosperity and Security Partnership which garnered resistance on both sides of the border, after which the SPP proponents gave up the idea of implementing it through legal and legislative means.

Currently we have Beyond the Border: A Shared Vision for Perimeter Security and Competitiveness, the most recent Harper/Obama zombie version which appears to be on continual life support.

If you're interested, I wrote about how all this unfolded over several years here.

Anon@9:47 : Notable that Kenney's estimate of corporate abuse of the TFW system is "less than 1%", yet the Cons purport to believe that citizens' abuse of voter vouching is massive because - human nature.

re NAU. The goal of the transnational corporations has always been to position themselves above the sovereign power of any particu­lar nation while being served by them.

Anon@3:41 : The 90% of the world's extraction corps registered in Canada have a history of treating the rest of the world's citizens this way. We looked the other way and now it's come home to us.

Alison, I just recently found out about these crooks and everything that's happening in Canada makes sense now. This has always been the way throughout history when only the rich rule, the poor get screwed at the expense of the rich who take enormous handouts from the ruling establishment but won't let any help go to the bottom period. Should I be surprised? Yes this damn well should not happen here in Canada, but more so I should be angry at these clowns but at the same time you got to hand it to them for being some the most stupid hypocrites ever to have come along in Canadian history. They need more exposure because they are terrified of it. Right now with their man Steve at the helm they must feel awfully smug. Time to break the hold they have on parliament by exposing it. :

"Given the mastery which big business now has over the public policy-making apparatus in Ottawa, elected Members of Parliament have been reduced to a role of simply rubberstamping the decisions already made by cabinet in the interests of the big business shadow cabinet." -from my post above every voting Canadian needs to know this before election time.

Also there is this:

If you are still in touch with the fellow who is walking across Canada you should maybe forward him a copy of this petition its short sweet and to the point I'd like to see over a million of these show up in parliament with Burnaby-Douglas MP Kennedy Stewart between now and the next election. Silent majority here is your chance to be heard.

Hey everyone! I wrote that story and would love to talk to people who have heard nothing back when applying for jobs on the job bank. I set up a fake email address and no one has ever replied to me when I have emailed several times asking for more information about various postings. If you have had a similar experience, please email me at lee-anne.goodman@thecanadianpress.com

Thanks, Lee-Anne. Great story from you and have updated post with your request for peoples' job bank experiences.

Kenney's defence of the job program today:
"Kenney ... has said it receives seven million hits a month from job-seekers and that thousands of Canadians have signed up in the last two years to be notified about openings.

hahaha
Hello I am the daughter of a recently deceased Nigerian prince ...

lots of jobs on job bank do NOT exist. Talked to simeine from personnel agency about a specific job, did not exist. It is just for adding potential candidats.