The March of the Catholic Schoolchildren 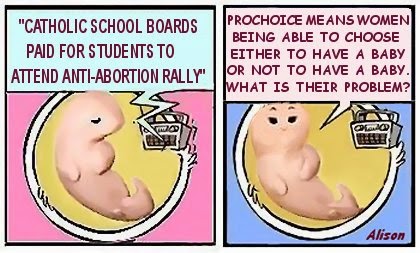 May 4 - 9  2014 is Catholic Education Week in Canada - the details of which you could read about here if you were allowed to, which apparently you aren't.

The program agenda entails several pages of Ontario Catholic schools and their projects for the week under the theme "Serving in the Love of Christ".

Yesterday, Thursday, was "Serve with Justice" Day which evidently entailed bussing hundreds of their students to Parliament Hill in Ottawa to attend Campaign Life Coalition's March For Life anti-abortion rally ... in what JJ in comments over at Dammit Janet! calls "The March of the Catholic Schoolchildren".
Ha! An Unrepentant Old Hippie sighting!

For critics, public funds being used to transport students to a rally against abortion — a right guaranteed by the Supreme Court of Canada — is controversial.
The annual March For Life rally, organized by national pro-life group Campaign Life Coalition, is now in its 17th year. The group aims to defund abortion services in Canada and ultimately eliminate the practice. They also take issue with gay marriage, gay-straight alliances in schools, transgender identities, comprehensive sex education and stem-cell research.

A variety of reactions from the faithful on the podium greets two streaking prochoice protesters : 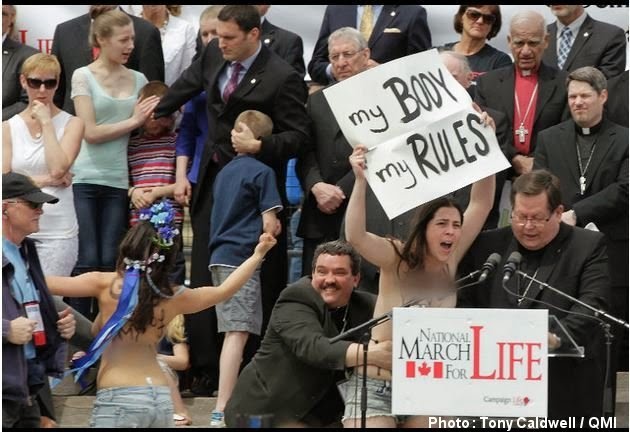 The unperturbed speaker at the mike, according to this guy who rattled off the names of dozens of attending cardinals and bishops, is Cardinal Gerald Cyprien Lacroix, archbishop of Quebec, delivering a special message from the Pope :

"His Holiness Pope Francis is pleased to greet everyone taking part in the 17th National March For Life in Ottawa and he assures them of his spiritual closeness as they give witness to the God-given dignity, beauty and value of human life. He prays that this event foster greater respect for the inviable right to life of each person from conception to natural death and supports the efforts of all who labour to ensure that this fundamental right receives adequate legal protection."

His Holiness is evidently not a fan of "My body, my rules" as an integral part of the "dignity, beauty and value of human life" that requires "adequate legal protection".

Chronic abortion bill pez dispenser and Con MP Stephen Woodworth was saddened to hear that all NDP MPs are pro-choice and Justin Trudeau will not be allowing any more anti-choice candidates into the Liberal Party :

"I feel very sad for my colleagues in the Liberal Party that democratic procedures and diversity of opinion is giving way to kind of this top-down ideological approach," Woodworth told CBC News

and on twitter :  "When did LPC become merely a tool for the leader's personal ideology?"

Irony sighs and wonders if it's too late to get a job doing vaudeville instead.
.

Speaking of irony, isn't it kind of ironic that you have a fetus arguing for abortion here?

"No one sees a problem when a woman topless is there for selling a car." -Delphine Bergeron, one of the two protestors, how true Delphine how true.

Quote from the CBC article quoted in the post.

I can't get over how sad it makes me that those kids are being shielded. I hate to think what will become of them.