A National Prayer Breakfast for Israel, Pipelines, and Evangelicals 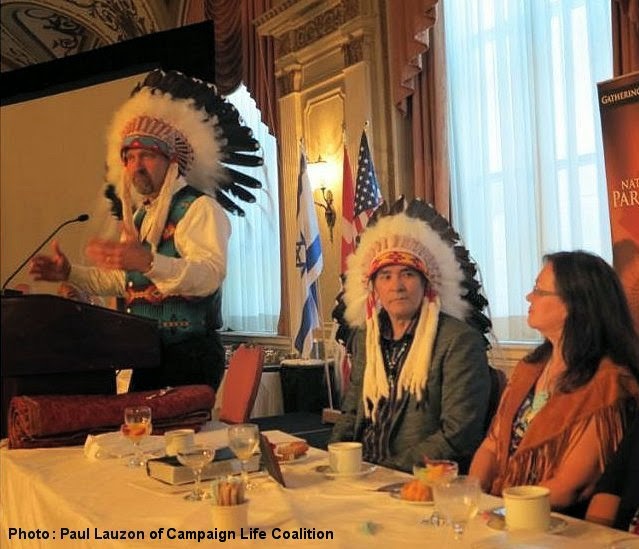 What an odd photo this is.

Chuck Strahl -
is seen here wearing a FN headdress and giving a speech at the first Annual National Aboriginal Prayer Breakfast in Ottawa on June 21 last year. You'll notice he's speaking in front of the flags of Israel, Canada, and the U.S. - but none that I can see for First Nations.

Seated is Prayer Breakfast founder and former Cree chief Kenny Blacksmith of Gathering Nations International, a ministry to "promote a charter of forgiveness between First Nations and the government, churches and people of Canada".  In 2010 Blacksmith organized the National Forgiven Summit for First Nations, Metis and Inuit people to come to Ottawa to accept Stephen Harper's 2008 apology for residential school abuses.
Harper's outreach to First Nations is looking a tad tattered recently in light of his determination to push his tarsands-to-tankers pipeline scheme through FN lands to the west coast whether they like it or not.

Blacksmith's 2006 Covenant of the First Peoples of Canada, which appears to have garnered more support among evangelicals than First Nations, has 12 signatory witnesses, of which one is anti-abortion crusader Faytene Kryskow Grasseschi who administered Blacksmith's National Forgiven Summit facebook page

Appearing on 100 Huntley Street, flagship of Christian broadcaster Crossroads International whose chairman accompanied Harper to Israel in January, Blacksmith explained why Article One of the Covenant proclaims to "bless Israel"


"We recognize the Jewish people as the first of all First Nations - they are a very tribal people and in fact you know I've always told our people that the Jewish people have a role in place to restore the integrity of the gospel of Christ back to our people."

Also speaking at last year's Breakfast was the co-host of The 700 Club Canada, and Christian Zionist Rev. James Goll from Tennessee, author of "Praying For Israel's Destiny : Effective Intercession for God's Purposes in the Middle East".


The breakfast was co-hosted by two anti-abortion crusaders, Con Senator Don Meredith - who received an honorary Doctor of Divinity from the a fore-mentioned 100 Huntley Street - and Enbridge pipeline booster Con MP James Lunney, who also accompanied Harper on his big trip to Israel in January, along with David Hearn, president of Strahl and Harper's church, the Christian and Missionary Alliance.

All of which is just by way of my introduction to Amy MacPherson's brilliant The Granddaddy of Government Scandals, a research project that began investigating the federal government links to the anti abortion lobby and grew and grew and grew ....
.
Posted by Alison at 3:30 pm
Email ThisBlogThis!Share to TwitterShare to FacebookShare to Pinterest
Labels: abortion, anti-choice, Chuck Strahl, Enbridge, evangelicals, First Nations, Israel, Kenny Blacksmith, Stephen Harper, tarsands-to-tankers pipeline

It is ironic that the so-called 'Christian and Missionary Alliance' does not seem to understand the idea of Christianity.

Consider the miracle of the five loafs and two fishes. Christ wanted to ensure that his audience was physically fed before they were spiritually fed. The Reformists would, no doubt, call Jesus a socialist. After all, according to modern radical right wing doctrine, everyone must pull themselves up by their own bootstraps.

The Buddha is reported to have said that everyone's children, animals and themselves, must be fed before they can contemplate spiritual matters.

I am tired of Harper, Manning and the rest of the gang down in the bunker, trying to pawn off their duplicitous messages on the rest of us, when they don't appear to have any real understanding of the message.

Harper's outreach to FNs was in tatters at least since the orchestrated Attawapiskat smear, intended as a preparatory smear of BC FNs blocking Northern Gateway, and the Idle-No-More movement it provoked.

We had really hoped the 2008 official apology to residential school victims would be as sincere as most Canadians wanted it to be. The revelation that the apology was trite, cynical and manipulative redoubles the hurt and resentment it was meant to address and multiplies immensely adversity in settling the treaties owed to BC FNs.

Most galling is that Harper makes it as plain as he can.

when I was a kid, more than 55 yrs ago, pretty much everybody went to church/temple. After sunday it was business as usual, back stabbing, abusing the wife and kids, etc. Then I noticed one of the uncles was just the most generous, kind, person. Then later I found out he was the families one and only atheist. On that day I decided I wanted to be one when I grew up because he never said an unkind word to anyone, was nice to his wife and kids and gave money to other people. I'm an atheist now and trying to live up to my uncle's examble. I didn't say I was nice like him, I'm working on being a better human though.

Hey all you will like these pictures of the chief hypocrite in feathers, too bad he was not tarred.