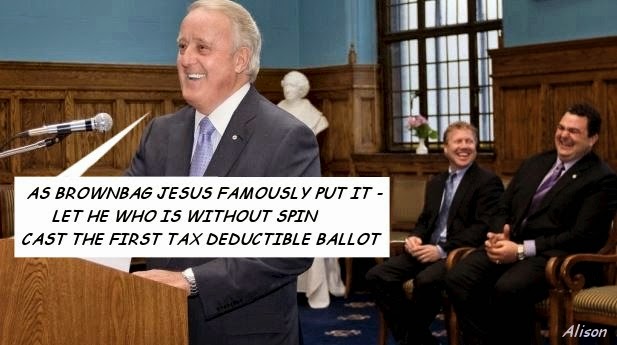 "These were funds that were raised separately and essentially moved through the EDA. They were put into the EDA and moved straight back out again "

explained Alan Wilson, head of the Peterborough Conservative electoral district association, without once using the phrase in-and-out scheme to describe the apparently legal tax receipts they issued to the $600-a-plate donors after funneling them through the EDA in May 2013. Del Mastro's brother Doug sits on the board.

Del Mastro, found guilty on three counts of violating the Canada Elections Act including faking documents to cover it up, will be sentenced along with his accountant to fuck all this Friday. He resigned his seat in the House of Commons two weeks ago in a move that allows him to retain his pension of some $44,000+ per year starting in the year 2025.

In 1997, Brian Mulroney, PM of Canada from 1984 to 1993, received a $2.1-million defamation settlement from the taxpayers of Canada for unproven RCMP allegations that Mulroney had accepted bribes in the Airbus affair concerning government contracts. Mulroney testified under oath that he "never had any dealings" with arms dealer Karlheinz Schreiber, knew him only "peripherally" and they had a cup of coffee "once or twice."

Ten years later, Mulroney admitted to having received three secret payments of $1000 dollar bills in brown paper bags from his business partner Schreiber. Totalling $225,000 to $300,000 and beginning when he was still a member of parliament, this represents a much smaller haul than he received from us for not having disclosed this information under oath ten years earlier .

Jason Kenney attended the above funder but not shown in photo.

Update : Peterborough Examiner takes a closer look at the numbers :


"The Examiner reported shortly after the dinner in 2013 that roughly 120 tickets had been sold.
Yet the financial returns for the riding association for 2013 show 53 people bought tickets. Of those, 23 people - including Brian Mulroney - bought two tickets, while the rest were single ticket-buyers.
It all adds up to 75 tickets sold. [Note : 76, actually]
It's unclear why the initial reports of 120 tickets sold do not agree with the riding association's financial return, and Wilson wouldn't comment."

Are 44 tickets missing payment and if so, were tax receipts issued for them?
.
Posted by Alison at 3:42 am
Email ThisBlogThis!Share to TwitterShare to FacebookShare to Pinterest
Labels: cartoon, Del Mastro, election fraud, in-and-out scheme, Jason Kenney, Mulroney, Rick Dykstra

I think I'm going to throw up!

Zoom you are not the only one...

Why does a Prime Minister receive a "$2.1-million settlement from the taxpayers of Canada" excuse me?

This is sheer lunacy...

From your link "Brian Mulroney":

"Harper's "hand-picked independent third party" advisor has regretfully noted that his mandate "does not allow him to recommend that a public inquiry not be held" at all into the Mulroney Schreiber scandal, but that doesn't preclude him recommending a very narrow limited one behind closed doors.
Right off the top David Johnston suggested it shouldn't be fully public, and

CP : "Johnston's limited terms of reference do not include the $2.1-million libel settlement Mulroney negotiated with the Canadian government in 1997 while allegedly misrepresenting, under oath, his relationship with Schreiber.
And they would likely keep an inquiry from following the $10 million in "grease money" that German court records suggest was given to Schreiber by Airbus International to bribe Canadian officials in the 1980s."

Then in 2010, Harper rewarded David Johnston with the post of Governor General of Canada

Clearly, these 'gentlemen' prove that crime does pay.

Yes, the nice little family of cons continue to take their big share of the pie. Nigel Wright who is so relaxed with handing bribes that he can't even be held accountable for handing out bribes used to work for Mulroney.

Seriously need to reform the system.

The list of corruption is so long that its starting to make AdScam look like a clerical mistake in comparison.

Kim the worst part of all is he will probably get a pension still much bigger than yours and mine combined...

Go figure Boris is right crime does pay off in spades as they used to say.

Kim : Del Mastro's previous lawyer Jeff Ayotte indicated there would be no reopening of the case - even though Del Mastro suggested he would do immediately after being found guilty on Nov 3. "That's her opinion," he said of the judge outside the courthouse.
Presumably there will be no reopening because they chose not to table some evidence in the trial so they don't have grounds to suddenly decide to do so now.

However ...
"On Wednesday, Toronto lawyer Leo Adler said he's taken over Del Mastro's case from local lawyer Jeff Ayotte.
Adler said he cannot be in court on Friday, so he got consent from both the Crown and McCarthy to hold off on sentencing until January.
He pointed out that he hadn't been involved in the trial, and that he needs to review the transcript before determining "what steps we'll be taking."