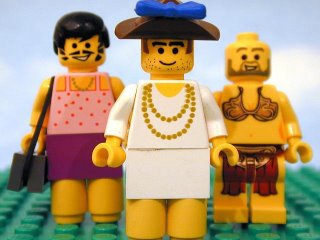 "That this house call on the government to introduce legislation to restore the traditional definition of marriage without affecting civil unions, and while respecting existing same sex marriages."

Yawn. Ok, so what is this about really?
It's about Steve forcing his so-con base to lose the very issue they've staked all their chips on.
Afterwards, he can stop taking their calls and finally get to work on that moderate image.
They will be pissed but really - who else are they going to vote for?
Losing this one will be a big gain for Steve. It's perfect.
"Debate" to start on Wednesday.
Image courtesy The Brick Testament.
UPDATE: Defeated 175 to 123. 13 Libs and 13 Cons, including Peter MacKay and Jim Prentice, voted against party lines.
Ottawonk called it a year ago.
Posted by Alison at 4:45 am
Email ThisBlogThis!Share to TwitterShare to FacebookShare to Pinterest

Q will be delighted to see the lego people!!!!!!!!!
and yup, steve will just say to his supporters, 'i promised, i followed through on my promise', making him look good to them and his 'putting the tory back in tory' shirt.

I'd like to pick a nit with your choice of image on this story. It appears to be the image about crossdressing...

As much as pop culture tends to confuse transgenderism and homosexuality - but they aren't really the same thing.

Most crossdressers are in fact quite heterosexual, and transsexuals (those who transition from their birth gender) present a whole new dimension to the question of sexual orientation - both pre and post transition.

Oh yeah it's Machiavelli For Dummies. Harper didn't need his game theory wonks for this decision.

Um, Grog, I think that image was chosen to represent the socon view of homosexuality, not Alison's.

Yup, and besides, it's an old Rovian trick to never give the base exactly what it wants......

After all, if you did, why would they have to keep supporting you if all your invented, not to mention illusory, boogeymen were no longer haunting their oh so slightly tainted champagne dreams and caviar wishes.

Um, Grog, I think that image was chosen to represent the socon view of homosexuality

I kind of figured that (and Allison left a note on my blog to that effect) - I just don't like perpetuating stereotypes - especially when they are outright wrong.

Same old sex.That's it. That's what strains marriage. No debate here.
It's what drives Iris to eat the mousens and the lego men to wear the blousens.

Those outfits are fine but for the love of all things holy, can't those guys shave when they're in drag?

did we actually manage to get one right? awesome.