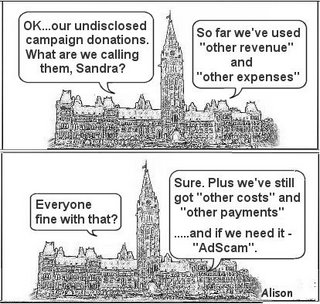 Link
Posted by Alison at 4:40 am
Email ThisBlogThis!Share to TwitterShare to FacebookShare to Pinterest
Labels: Accountability

You have no idea how often our blog appeared near the top of Yahoo and Google searches because Britney Spears' name was mentioned in one particular post and the word "beaver" is in the title of the blog.

Addressing the "Other" rather than Britney, I did wonder at the lowballing of "suddenly disclosed" expenses. The general count thrown about media reaction seems to be just over 1 million dollars, but the numbers listed come closer to 4 million. And that doesn't include the previously undisclosed 'transfers' from riding associations.

I'd be interested in reading how that much money can be lumped under "other", but then, I suppose just because they call it that doesn't mean Elections Canada will accept it at face value.

There were those who predicted the extra monies used for the CPOC campaign and the optics of the Income Trust "scandal" announced midcampaign by the RCMP (in which charges are yet to be laid, despite the highly unusual insistence to an individual political figure a file was being opened), are what gave the CPOC even their minority government.

Both actions are in the public eye now with a growing odeur de fromage. I hope the prognisticators enjoy their Solstic presents and it's around for them to enjoy for months.

Niles :
Based on past performance, Elections Canada is unlikely to accept large "Others" at face value.
Rather worrying though that Chief Electoral Officer Pierre Kingsley, who has held the post since Mulroney and is the very guy who has been leaniing on the Cons since June to cough up their books, quit the day after the Cons complied with his request.
Link

I agree there's a lot more to come out here yet.