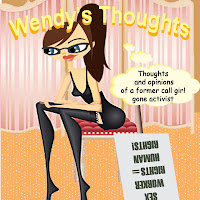 Immigration Minister Diane Finley : "The previous Liberal government gave blanket exemptions to foreign strippers to work in Canada," Finley told the House of Commons.
"(This was) despite warnings that they were vulnerable to forced prostitution and other exploitation. . . Thanks to (this legislation), the good old days of Liberal Strippergate will be a thing of the past."

Leaving aside forever the obvious point of this legislation being to slag the Libs while simultaneously sucking up to the thickest of their base that they are somehow banning both sex and foreigners, let's hear from someone who, unlike the Imm Min, actually knows something about it.

The thoughts and opinions of a former call girl gone activist, Wendy :
"All this legislation will do is consign trafficked women to the most unregulated market of all – the underground market.
By shifting from regulation to restriction the Conservative government is no longer going to be viewing trafficked women as victims but rather they will be viewed as illegal immigrants and as prostitutes, meaning that the trafficked woman will be criminalized, go to jail and most likely deported. This means that if a women is a victim of abuse she will be less likely to report her abuser due to fear of being criminalized.
And although employers and agents who employ foreign strippers will also be breaking the law, it is the women who will be at a greater risk since it is easier to deport illegal migrants than to successfully prosecute club owners or agents under criminal or immigration legislation."

H/T Anon reader
Posted by Alison at 11:14 am
Email ThisBlogThis!Share to TwitterShare to FacebookShare to Pinterest