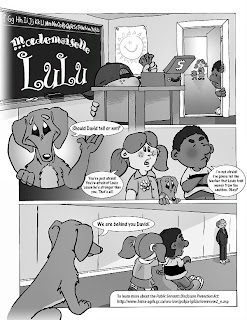 Go on - click it.
Ottawonk provides us with this, um, refreshingly simple example of cartoon ethics right off the government's Public Service Human Resources Management Agency website.
Uh huh, it really is a cartoon extolling the public service employee's obligation of whistleblowing.
And just in case said public service employees are unable to grasp the cartoon in all its mindblowingly awesome simplicity, the Office of Public Service Values and Ethics also provides a little transcript of it as well.
Here at Creekside, we would like to make one or two small adjustments to that transcript, in keeping with the Con gnogov's recent record on whistleblowing :
Panel 1 : An Environment Canada employee sees John Baird virtually stealing money for Alberta's oil industry in his upcoming Environment Canada legislation.
Panel 2 : Yo, public service employee! People should know about this! Do da right thing!
Panel 3 : Lulu looks on as the hapless Environment Canada employee is persuaded to reveal Baird's regulatory shenanigans to the Canadian press and public, here rather aptly represented by a somewhat small and insignificant-looking figure way off in the background.
Panel 4 : Not shown. Hapless Environment Canada employee led off in handcuffs by the RCMP.
Our new transcript more accurately reflects the experience of Can Enviro employee X, arrested and handcuffed at his Environment Canada desk for his act of whistleblowing. He was released a couple of hours later without charges, presumably because he had not broken any laws.
We eagerly look forward to the government's next "Window on Values and Ethics" cartoon and strongly suggest it should be about employee intimidation. They could include this handy reaction to the day's events from John Baird, as caught by1337 hax0r :
“The arrest is a signal to other government employees that future leaks of information won't be tolerated," suggests Environment Minister John Baird.”
Conservatoon ethics.
UPDATE : CBC : The EnviroCan employee is Jeff Monaghan, news reader temp at EC, member of a collective that recently opened an anarchist bookstore in Ottawa, and the drummer in a punk band : 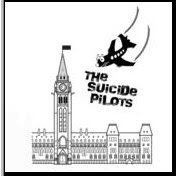 Posted by Alison at 6:16 pm
Email ThisBlogThis!Share to TwitterShare to FacebookShare to Pinterest
Labels: Baird, ConToons, Environment, Ripping off Ottawonk

Nice; I'm gonna go spread this around a bit. :)
Here are some conversations about the whole thing: