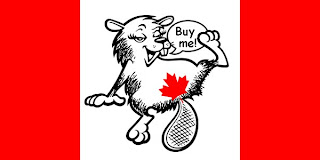 600 Canadian companies gone to foreign ownership since the start of 2006
Did you notice last week that Don Drummond of TD Bank and Jack Mintz formerly of CD Howe both used the following exact same phrase within days of each other, on CBC TV's News Hour and CBC Radio News respectively, to allay concerns about the fire sale of Canadian companies to foreign ownership?
"The real story of the past 10 years is that Canada is hollowing out business in other countries."

I thought it an odd coincidence at the time - ok, what now? - but today David Olive at The Star refutes the factual basis behind their claim :

"The Statscan figures cited by Drummond are out of date, stopping at 2005, just as the manic buying of Canadian assets in 2006-07 was getting underway. The number of takeovers back and forth is a red herring. What matters is their total value. And in 2005-06, the world bought $66 billion more of us than we bought of the world."

I have argued in more detail previously that Canada has both the means and money to protect Canadian companies from foreign takeover.
The means : Investment Canada's mandate requires that sales to foreign owners be "of net benefit to Canada".
The money : Canada Pension Fund has $1.3 trillion of our money, our money, that it is currently pumping into crap like this, instead of investing it in Canada's future, our future.

OK, so what are we missing? The political will apparently.

Harper made a few peeps this year about not selling Canadian companies to any of the countries on the US shit list. Has he invoked the Investment Canada mandate towards achieving even that meager goal? No, he has not.

By the time you have even the CCCE free marketeers expressing alarm, and Canadian boards of directors weeping at takeovers they are powerless to prevent, and Preston How-soon-can-we-join-the-US? Manning saying things like :

"If you don't want bin Laden fiddling with Quebec hydro lines or Beijing controlling the oilpatch, there should be national-security provisions in the approval process to protect our values and objectives",
In other words, by the time you have free marketeers begging for government intervention in the form of regulation of the marketplace....
well then, Steve, it's probably time to let go of the disastrous free marketeer ideology of your youth and do some of that Standing Up For Canada.

Now, can someone please explain to me the significance of that Drummond and Mintz dual messaging?
Posted by Alison at 2:24 am
Email ThisBlogThis!Share to TwitterShare to FacebookShare to Pinterest
Labels: Canada Pension Plan, Economy

Do you really think it's anything more complicated than an aroused nationalism getting in the way of making a buck?