Grover Norquist in his own bathtub 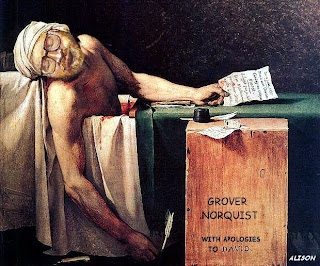 "I don't want to abolish government. I simply want to reduce it to the size where I can drag it into the bathroom and drown it in the bathtub."
~Grover Norquist
Terrific post from the Rev, and I mean a really terrific post, "Swiftboating Obama", up at both The Woodshed and The Galloping Beaver :
"Norquist and his masters believe that government is simply an often unavoidable impediment to them making money....They have appointed incompetents to vital positions to ensure that the government departments involved fail when called upon ("Heckuva job Brownie"). This helps undermine people's faith in government and provides ammunition to show that the work of government should be privatized. Think about the arguments for school vouchers, or look at the "shock doctrine" privatization of things like water systems, power grids and transportation systems around the world, and it becomes clear the motives are to make a profit for corporations and their wealthy shareholders and to ensure that none of that profit is ever handed back to help those who are not wealthy."
Why isn't this commonly referred to as 'looting'?
Back in May '06, the Rev left me the following comment : "If only someone would drown Grover Norquist in his own metaphorical bathtub."
There ya go, Rev.
Bonus : 900 Foot Jesus : SPP and the death of public service or
why having fans of Norquist running the Canadian government is not working out for the rest of us.
Posted by Alison at 8:30 am
Email ThisBlogThis!Share to TwitterShare to FacebookShare to Pinterest
Labels: Norquist, SPP, The Shock Doctrine