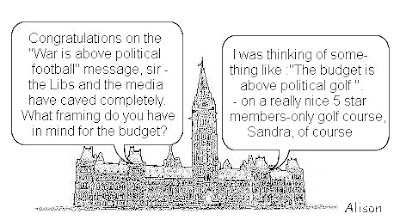 What's with all this "war is above political football" crap?

Thomas Walkom : Why shouldn't voters discuss war?
"Those who praise the Liberals for supporting the Conservative government on Afghanistan argue that it is crucial to avoid politicizing the war, lest it become an election issue. The argument here is that the war is too important to be left to the voters......When else are we supposed to get a crack at it?"

Answer : Apparently when it's safe enough even for Liberals.
Posted by Alison at 10:29 am
Email ThisBlogThis!Share to TwitterShare to FacebookShare to Pinterest
Labels: Steve and Sandra