Steve and Sandra and Grover 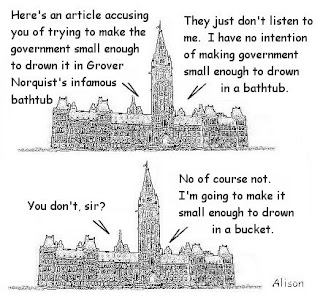 And here's the article : Harper's 'nation of shopping centres'
"Tom Flanagan, Prime Minister Stephen Harper's longtime confidant and former chief of staff, is delighted at the Conservatives' success in "tightening the screws on the federal government" to dramatically reduce its significance in the daily lives of Canadians.
The Conservatives' three budgets have left Ottawa financially incapable of offering any new national social program like affordable housing, higher education or day care. Although overall spending went up, mostly on the military, measures were taken to deplete revenues to the point future governments' hands will be tied unless they raise taxes or run deficits, both prescriptions for political suicide.
Flanagan is impressed that Harper managed to execute his stealthy revolution in Canadian public policy with barely a whimper from the public. But that, too, was the strategy according to the University of Calgary professor and Reform party founder.

"Part of the execution of the plan was that there would be conservatives attacking him, like John Williamson (of the Canadian Taxpayers' Federation) and Gerry Nicholls (Harper's successor as head of the far-right National Citizens' Coalition). That's extremely useful, to have that kind of pressure there, berating the prime minister for not doing enough."

Posted by Alison at 4:40 am
Email ThisBlogThis!Share to TwitterShare to FacebookShare to Pinterest
Labels: Flanagan, Norquist, Steve and Sandra

aloha alison!!!!! countdown to thursday and my return to the island. see ya then!

Does that mean that the next edition of F.S.P. will begin next Tuesday?!

Re the downsizing of the tub/bucket....You sure that isn't a teaspoon Alison?