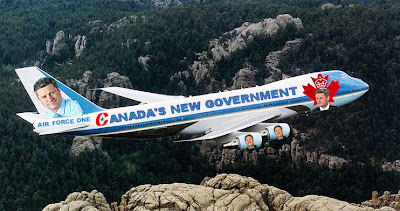 DAVID PUGLIESE : "Canada's defence strategy for the next 20 years will be based on speeches by Prime Minister Stephen Harper and Defence Minister Peter MacKay given Monday in Halifax.
In a highly unusual move, the Conservative government will base its entire future rebuilding of the Canadian military on Mr. Harper's 10-minute speech and Mr. MacKay's 700-word address. No actual strategy document has been produced, nor will be produced, according to government and defence officials."
Asked about when the actual Canada First Defence Strategy was going to be released, Jay Paxton, Mr. MacKay's press secretary replied: "It is a strategy that you heard enunciated by the Prime Minister and Minister MacKay."...snip..."As such, the speeches are the strategy."
Accidental Deliberations : "For those who held out hope that the Cons' brand of cult conservatism would stop at a mere Stephen Harper portrait gallery, matters have managed to get worse. From now on, Canada's national defence strategy consists of parsing the Glorious Leader's prophetic vision of Canada Firstness."
Operation Enduring Steve.
Posted by Alison at 6:36 pm
Email ThisBlogThis!Share to TwitterShare to FacebookShare to Pinterest
Labels: Harper, MacKay

Between the lines: "our new defence policy allows us to buy whatever ultra shiny kit the defence lobby tells us to buy. This is accomplished by cleverly avoiding anything like a paper committment or strategic design for the armed forces. Furthmore, by cleverly not committing to anything on paper, we can successfully parry accusations of not keeping promises because we didn't write them down."