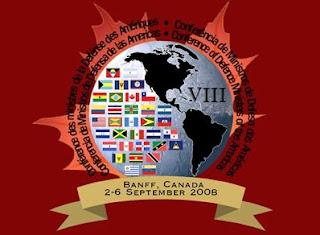 The theme of the 8th Conference of Defence Ministers of the Americas being held in Banff, Alberta this week is "Confidence Building through Co-operation and Collaboration".
So how is all that "collaboration" coming along?
US Defense Secretary Robert M. Iran Contra Affair Gates addressed the conference yesterday :
"We have a collective dream: a free, prosperous and secure hemisphere,” he said. “By working together, we can transform that dream into reality and embrace the great promise and potential of the Americas."
Canadian Defence Minister, chief collaborator, and host of the conference Peter MacKay :
"Now more than ever, we are all connected and need to cooperate to achieve the security, democratic development, and prosperity we all desire."
Col. John Cope, Senior Research Fellow at the Institute for National Strategic Studies, spoke at a conference pre-meet back in August sponsored by the Center for Strategic and International Studies :
"The lack of operating procedures causes redundancies that could be avoided with greater coordination in the region to streamline efforts. If the Americas can achieve a successful system for disaster response, Cope argued, this will build confidence in regional cooperation and increase countries’ willingness to collaborate in other areas."
Naomi Klein would probably call that "pre-disaster capitalism".
(Speaking of the Center for Strategic and International Studies, also known as CSIS-no-not-that-CSIS-the-other-CSIS, and "collaborating in other areas", whatever happened to their North American Future 2025 Project, conducted in collaboration with the Conference Board of Canada, to draft a blueprint for economic integration of the continent : "the overriding future goal of North America is to achieve joint optimum utilization of the available water."?)
Ok, back to the conference:
US State Department : "Sub-themes for this year's gathering include generating military assistance for regionally or nationally hosted events like the 2010 Winter Olympics in Canada and peacekeeping support in places like Haiti. CDMA's final communiqué may address the need to create a multi-nation disaster task force."
A multi-nation disaster task force? Mutual military assistance for the 2010 Games? That's TOPOFF 5, isn't it? Say, how is TOPOFF 5 coming along anyway? Military contractors still doing both the writing of and bidding on government proposals for the U.S. of A.'s largest counterterrorism exercise next year? Now there's a collaboration for you.
CP : "MacKay says the size of the [hemisphere] makes it challenging to co-ordinate efforts.
He says the ministers will discuss how to co-operate on providing armed security during natural disasters such as hurricanes or major national events like the 2010 Olympic games in Vancouver."
Yeah, there we go. The 2010 Games as a natural disaster. Go, Petey!
America.gov : "[Conference delegate] Carlo Dade, executive director of the Canadian Foundation for the Americas in Ottawa, told America.gov that hemispheric military police relations are a subject of special interest to Canada."
Canadian Foundation for the Americas, better known to us as FOCAL, a quasi-government booster of free markets and private enterprise for Latin America, published this in June :
Alberta Oil Sands: Sustainable Energy Security for the Americas?
"The oil sands hold the promise that both North and South America can rely on Alberta and its energy resources for decades to come, as trade within the Americas grows and Canadians become more fully integrated into pan-American economic and cultural streams."
Collaboration boosters scorecard :
Water - check.
Oil - check.
Military integration - check.
And you all thought the SPP was dead. Oh, ye of little faith.
Posted by Alison at 11:11 am
Email ThisBlogThis!Share to TwitterShare to FacebookShare to Pinterest
Labels: 2010 Games, Banff, Center for Strategic and International Studies, FOCAL, MacKay, North American Future 2025, SPP, TOPOFF 5

'Ya done good on this one, Alison!

So this is the meeting I heard petey was going to - a brief blurb on one of the networks with absolutely no details - go figure. Looks like the integration thing is still deep in their plans.

As I was reading this post, another of the MANY "harper is my main man" commercials is airing. How do they get away with this stuff? Is it not counted in the limit on campaign spending (not that anything so trivial would stop the ReformaTories) ? ! ? !