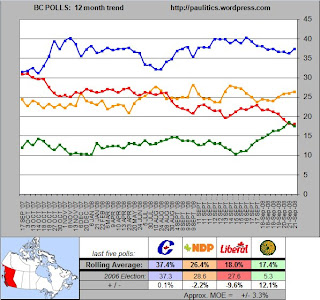 Snagged from Paulitics : this great graphic of 12 months of polls in BC.
Greens and Cons are up, while the Libs show every indication of coming dead last among the four parties.
Cue a little chat about strategic voting from Liberal Bob Rae at Team BC :

"Former NDP Premiers Bob Rae and Ujjal Dosanjh teamed-up Friday to deliver a message to progressive voters: to fight for British Columbia and stop the conservatives, the only choice for progressive voters is the Liberal Party of Canada.

Rae said that he returned to federal politics to stop Stephen Harper and said he’s determined to do just that, describing this last parliament ... as the house that Jack built."

And this is the guy the Libs have sent out to talk us into strategic voting ?
Suck on this, Bob : 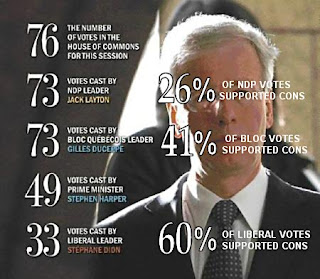 Strategic voting is a horrible horrible horrible and sometimes necessary choice, depending on what's going on in your individual riding. I've done it.
But somehow the Lib call for strategic voting always amounts to "Vote for us or the Cons will get in!", even when, as in BC, it's obviously the worst possible available strategic choice to get rid of the Cons.
As Thwap said at Pogge's : "Rae, you miserable ignorant slut."
h/t Pogge, Paulitics, Accidental Deliberations
UPDATE : Dion rules out coalition
"Liberal Leader Stéphane Dion flatly rejected forming a coalition government with the New Democrats today on the heels of hints from NDP Leader Jack Layton that he'd be open to the idea.
Mr. Dion, speaking after an address to a Vancouver-area business crowd today, said he could not work with Mr. Layton in this way because the NDP leader wants to hike taxes on business."
Posted by Alison at 9:47 am
Email ThisBlogThis!Share to TwitterShare to FacebookShare to Pinterest
Labels: coalition, Dion, Election 2008, Jack Layton, strategic voting

"Greens and Cons are up, while the Libs show every indication of coming dead last among the four parties."

Did you mean to say Greens and NDP? The sentence above is correct, but in context you seemed to want to make a point about strategic voting that included the NDP.

Sorry if I'm misreading you.

Thanks for the salvo A--

This time 'round I think it would be great to really air this one out before we make the final call as things get close.

One place where, as we've discussed before will be Saanich and the Isles....

What we really need are some real, hard numbers.

Deanna : LOL! Does it sound to you like I'm saying "Please vote strategically! No, not you, dippers" ?
No, I just didn't mention the NDP increase because it isn't statistically significant, whereas the Green and Con increases are significant in terms of strategic voting.
Say, Deanna, wanna swap votes? ;-)


RossK : NDP Julian West is out in Saanich over nudity. (Last time I saw Briony Penn she was near naked on a horse on Howe St.;-)
So long, Gary Lunn, you ignorant prat. So long opening up the inside passage to oil tankers. So long nukes in the tar sands. So long firing watchdogs the night before they testify against you.

So, Alison, would you vote Lib if it was strategically sensible?

Yes. The Cons are an emergency.
I just resent the Lib's attempt to Con us into voting Liberal even in those instances when it will result in a Con victory.