Gaza : "an eye for an eyelash" 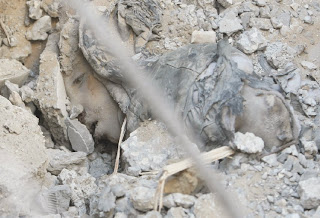 First the Israeli army drops the leaflets warning Palestinians to get out of their homes because there will be an air raid. Then they pack 110 of them, half of whom are children, into a single-storey house in Zeitoun, south-east Gaza, "for their safety". Then they bomb the house. Repeatedly. Then they refuse to allow medical teams to evacuate the wounded.

The Guardian :
"The UN put the Palestinian death toll at 758, of whom it said 42% were women and children – 60 women and 257 children. Around 3,100 Palestinians have been injured.
Three Israeli soldiers were killed bringing the Israeli death toll to 13, of whom three were civilians.
"There is no safe space in the Gaza Strip – no safe haven, no bomb shelters, and the borders are closed and civilians have no place to flee," said a report from the UN office for the coordination of humanitarian affairs. It said three quarters of Gaza's 1.5 million people had now been without electricity since Sunday, and 800,000 Gazans had no running water.
"The UN relief and works agency, by far the largest humanitarian agency in Gaza, suspended its operations yesterday, after Israeli forces opened fire on a UN-contracted convoy collecting food aid from the Erez crossing in north Gaza. One man was killed and two others injured. Later , a marked UN convoy of two armoured vehicles was hit by Israeli troops when they stopped to try to recover the dead body of a Palestinian UN staff member during a scheduled three-hour ceasefire."
I wonder what was difficult to figure out about a white truck with a big red cross painted on the roof. Perhaps that 14-0 UN resolution for complete withdrawal from Gaza was to blame.
The Guardian again :
"15,000 Gazans are sheltering in UN schools because they have been forced to flee their homes in the face of the Israeli air and ground offensive, or even ordered out by Israeli troops. The UN has opened 27 of its schools as shelters. "
Israel has bombed two of them despite the UN giving the GPS coordinates to prevent it, and the UN has called for yet another inquiry.
So what's the reaction from Canada?
Michael "empire lite" Ignatieff in The Star yesterday:

"Federal Liberal Leader Michael Ignatieff says Israel is justified in taking military action to defend itself against attacks by Hamas from the Gaza Strip.
"Canada has to support the right of a democratic country to defend itself," he told reporters in Halifax yesterday after speaking to a forum of business leaders on the economy.
"Israel has been attacked from Gaza, not just last year, but for almost 10 years," Ignatieff said.
"They evacuated from Gaza so there is no occupation in Gaza."

Horrifying and disgusting, I know, and all points we dispensed with yesterday.
Blog reactions to Iggy's tripe were swift : POGGE, PSA at Canadian Cynic, Dr Dawg
Iggy had more nuancey things to say than CP and the Star suggest, as reported by supporter James Morton, but Iggy's pro-Israel lines are the familiar AIPAC quotes that the Canadian press will recognize and parrot.
So where are we getting our news, apart from a pro-Israel press and The Megaphone?
If you follow no other links here today, please be sure to click this one at Sudbury Against War and Occupation - Justin Podur : Turn Off the Canadian Media, Please.
Good advice and good alternative recommendations.
P.S. Signed the Amnesty petition yet? Speak out for peace in Gaza.
Posted by Alison at 9:20 am
Email ThisBlogThis!Share to TwitterShare to FacebookShare to Pinterest
Labels: Gaza, Ignatieff, media bias, Palestine, United Nations, war criminals

What can one say? .....other than thank you for your excellent posts and share them with Facebook friends.
And send the photos and links to Mr. Ignatieff.

Mynalee : Thank you very much for doing the Facebook linking for me - I don't do Facebook. I left you a note at the Beav answering the questions you left for me there.