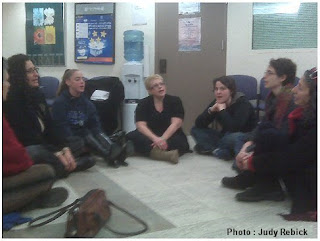 Well done, sisters!
"Protesters are outraged at Israel's latest assault on the Palestinian people and by the Canadian government's refusal to condemn these massacres. They are deeply concerned that Canadians are hearing the views of pro-Israel groups who are being represented as the only voice of Jewish Canadians. The protesters have occupied the consulate to send a clear statement that many Jewish-Canadians do not support Israel′s violence and apartheid policies. They are joining with people of conscience all across the world who are demanding an end to Israeli aggression and justice for the Palestinian people."
~ news release from Palestinian and Jewish Unity.
.
Here is Judy Rebick's account as related by Michelle at Rabble :
"They went into the consulate in small groups, and pretended they were there on other business. Once they were all in there, they sat down and told them this is a protest.
The officials in the consulate were absolutely irate over it. One of the security guards was "beside himself". He tried to intimidate them, saying, "You're in Israel now!" Judy retorted, "We are NOT. This is not the embassy." (Apparently only the embassy is considered Israeli territory, not the consulate - they had legal advice going in.)
The security guard tried to drag the youngest woman out, and she resisted. Judy told him to take his hands off her or they'd charge him with assault.
The security guard then tried to take the phone away from another woman, and when she wouldn't give it to him, he slapped her across the face. Judy told him that if he touches any of them again, he would be charged with assault. So the Israeli officials decided to let the police deal with them."
Continued at Rabble ...
.
Well done, Judy Rebick, professor; Judith Deutsch, psychoanalyst and president of Science for Peace; B.H. Yael, filmmaker; Smadar Carmon, Canadian Israeli peace activist, and the rest of you.
Thank you.
Posted by Alison at 10:09 pm
Email ThisBlogThis!Share to TwitterShare to FacebookShare to Pinterest
Labels: anti-war protest, Gaza, Israel, Palestine, rabble

I don't usually fixate on details, but it's interesting that the embassy is considered Israeli territory and not the consulates.
I once worked at a consulate in the US, and the only reason I could (I thought) was because it was considered Canadian territory.

Anyways, thanks for putting this up, it's a glimmer of humanity in this horrendous situation.