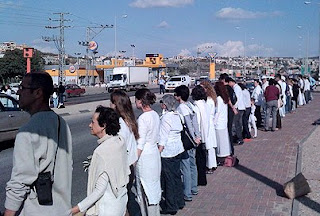 "Hundreds of Jews and Arabs from the north and center of Israel gathered near Kfar Kara'a on Highway 65 Saturday in a rally for peace. The only sign present at the demonstration read "Hand in hand – neighbors for peace".
They wore white and held hands to create a human chain along the road for one hour, without disrupting traffic."
h/t Godammitkitty @ Bread and Roses
And on Thursday Ayatollah Ali Khomenei banned hardline Iranian volunteers from leaving the country to carry out suicide bombings against Israel.
But in the US, the House of Representatives voted 390 to 5 "to recognise Israel's right to defend itself against attacks from Gaza".
Nice framing.
There was no resolution asking : "Does Israel have the right to own two concentration camps, Gaza and the West Bank?" h/t Juan Cole commenter
The five who voted "no" were Ron Paul (R-TX), Dennis Kuchinich (D-OH), Maxine Waters (D-CA), Nick Rahall (D-WV), and Gwen Moore (D-WI).
Ron Paul gave a four minute speech to accompany his vote : Israel created Hamas
.
Naomi Klein : "Israel : Boycott, Divest, Sanction"

"The best strategy to end the increasingly bloody occupation is for Israel to become the target of the kind of global movement that put an end to apartheid in South Africa."

Just one more example of why he would never have been electable on a national basis in the US.

I'm trying to get the word out to the Israeli and Palenstinian women: Sex for Peace!! Until, this conflict is settled, no sex!! I have been to Israel in 2006 and both of these groups are male dominated. From what I observed they need more Wine, women and song.