Gaza/Israel - by the numbers 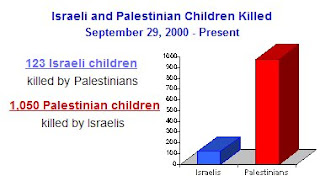 Politics - for the people links to Gaza/Israel statistics charts at If Americans Knew, who in turn provide links to the sources for their statistics.

I don't want to hear any more about how "even one death is too many" or "statistics cannot measure the pain" from those who are in support of colonialist ten to one kill ratios.

Sudbury Against War and Occupation reprints Gaza : The Logic of Colonial Power from Nir Rosen at The Guardian :

"Terrorism is a normative term and not a descriptive concept. An empty word that means everything and nothing, it is used to describe what the Other does, not what we do. The powerful – whether Israel, America, Russia or China – will always describe their victims' struggle as terrorism, but the destruction of Chechnya, the ethnic cleansing of Palestine, the slow slaughter of the remaining Palestinians, the American occupation of Iraq and Afghanistan – with the tens of thousands of civilians it has killed … these will never earn the title of terrorism, though civilians were the target and terrorising them was the purpose.

Counterinsurgency, now popular again among in the Pentagon, is another way of saying the suppression of national liberation struggles. Terror and intimidation are as essential to it as is winning hearts and minds.

Normative rules are determined by power relations. Those with power determine what is legal and illegal. They besiege the weak in legal prohibitions to prevent the weak from resisting. For the weak to resist is illegal by definition. Concepts like terrorism are invented and used normatively as if a neutral court had produced them, instead of the oppressors. The danger in this excessive use of legality actually undermines legality, diminishing the credibility of international institutions such as the United Nations. It becomes apparent that the powerful, those who make the rules, insist on legality merely to preserve the power relations that serve them or to maintain their occupation and colonialism."

h/t Resettle THIS! in comments at The Beav

Posted by Alison at 10:00 am
Email ThisBlogThis!Share to TwitterShare to FacebookShare to Pinterest
Labels: Gaza, Israel, Palestine

The problem is that the people whose minds have to change see that big red bar as an accomplishment, not a crime.

I hope that Kinsella guy sees this.
He seems to care about kids. Somewhat. Well, atleast his own.
Liberal minded,hey?