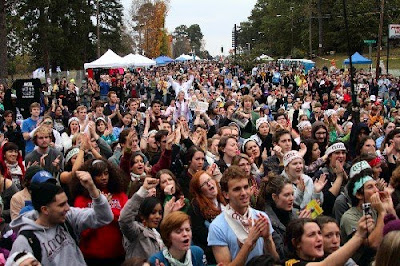 Gates touts support for WHINSEC in Halifax
Every November, thousands gather at Fort Benning, Georgia, to demand closure of the School of the Americas, renamed "Western Hemisphere Institute for Security Cooperation" in 2001, for the disappearances, torture and the murder of hundreds of thousands of peasants, community and union organizers, clerics, missionaries, educators, and health workers in Latin America. This year's vigil marked the 20th anniversary of the 1989 SOA graduate-led Jesuit massacre in San Salvador and focuses on the current SOA graduate-led coup in Honduras.
The protestors are hopeful. During his election campaign, Obama made sympathetic noises about closing down the school and last year Congress came within 6 votes of cutting off its Dept. of Defense funding.

So I was somewhat surprised to read that on the same weekend as the SOA/WHINSEC vigil, US Defense Secretary Robert Gates was up in Canada touting his support for WHINSEC. Prior to giving the keynote address to the Halifax International Security Forum - a closed shop affair for top brass from NATO countries to speak freely on matters of mutual concern - Gates gave one public presser with Defensive Minister Peter MacKay that I only just now got around to reading, courtesy of the US Defense Dept.

"The United States has made it a point to integrate human rights instruction into our joint training and education in programs such as the Western Hemispheric (sic) Institute for Security Cooperation."

Really? After all the coups, the disappearances, the brutal dictators, the now recalled torture manuals, isn't that rather like teaching a pig to sing?

Apologists for WHINSEC, which does indeed have mandatory human rights classes now, say it is not fair to judge the school on the basis of its graduates, that some pretty nasty characters likely came out of schools like Yale also and we don't lobby to have Yale shut down. I disagree. If a large proportion of nasty events featured Yale grads and if the Pentagon subsequently also had all their names classified, then yes, I think it's likely you could move Congress to within 6 votes of shutting it down.

For more of Gates' ideas on militarized solutions to climate change and to hear Airshow MacKay call him Bob, the presser transcript is here.

Irony note : Much of the groundwork for tracking SOA/WHINSEC over three decades has been done by Father Roy Bourgeois, a Viet Nam vet with a Purple Heart who founded SOA Watch after experiencing atrocities in Latin America. Since then, he has spent over four years in US federal prisons for nonviolent protests against the training of Latin American soldiers at Ft. Benning, Georgia.

This year he was nominated for the Nobel Peace Prize.
.
Posted by Alison at 2:28 am
Email ThisBlogThis!Share to TwitterShare to FacebookShare to Pinterest
Labels: Halifax International Security Forum, Honduras, NATO, Peter MacKay, Robert Gates, SOA/WHINSEC

Odd that none of the reporters at that Halifax press conference saw fit to report this.
Venezuela, Argentina, Uruguay, and Bolivia have all quit sending soldiers to WHINSEC; Canada still does.

This year he was nominated for the Nobel Peace Prize.

And who wins it? The guy running two wars and increasing troop levels.

Two comments from the public affairs officer at WHINSEC. One, please name just one person who learned to commit any crime from this series of US schools. If you do, you will be the first. Mere association is not evidence of anything. Two, Congress oversees WHINSEC every year, and Congress gets the entire list of students and instructors. Don't you think someone in Congress would scour those names to make those associations SOAW so loves. And for anonymous, Argentina, Uruguay, and Bolivia all still work with WHINSEC; he/she took a political comment as fact--always suspect.

Don't you think someone in Congress would scour those names to make those associations?

You've got to be kidding.