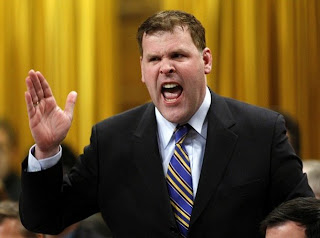 Rising to a question in the House yesterday as to why the Cons refused to act on first-hand accounts of detainee abuse in Afghan jails from troops, John Baird responded by asking why the leader of the opposition does not trust the word of "General Walter Natynczyk, a decorated war hero, someone who has served our country in uniform for decades"?

OK, John, seeing as you put it that way, we'll go with the general's account then.