Not "celebratory" enough for ya? 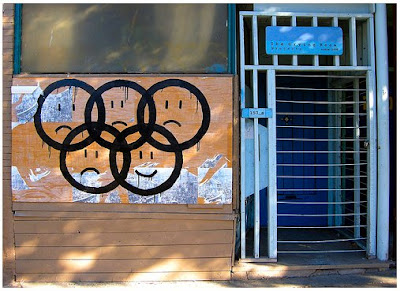 The City of Vancouver ordered the removal of the above mural from the public artspace outside the Downtown Eastside's The Crying Room gallery on the grounds it is "graffiti".
.
Artist Jesse Corcoran works at a homeless shelter: "The oppressive nature of the Games is what I wanted to capture and how the majority is suffering for the minority."
.
Gallery owner Colleen Heslin says it is the first time in ten years the city has ordered her to remove a work of art.
Vancouver spokesperson Theresa Beer says : "It has nothing to do with content."
.
Sure.
.
Robert Holmes, President of the BC Civil Liberties Association, has written to the city :

"Given the long and uninterrupted display of public art at this gallery, the tolerance of the City to date, the content of the mural, and the stipulations of the IOC and VANOC in limiting anti-Olympic expression, it certainly appears to be more than simple coincidence that the City has chosen this mural, at this time, to take exception to the Gallery's actions."

Yup.
.
Posted by Alison at 2:54 am
Email ThisBlogThis!Share to TwitterShare to FacebookShare to Pinterest
Labels: 2010 Games, censorship, Owelympics, public art, sucking up to the IOC, VANOC

"As It Happens" interviewed the artist and the gallery owner about the incident.

Gotta admit I had a smile on my face during the whole program, as they both handled it so well . . . .