A picture is worth ... in this case only about five words 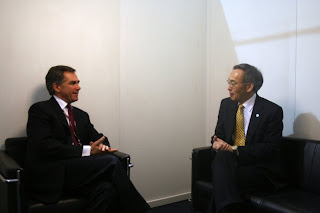 and those five words are "I gotta change the story", spoken by Environment Minister Jim Prentice's chief of staff Steve Kelly.
Seems Jim's press people "distributed a release for a photo-op of U.S. Energy Secretary Steven Chu and Prentice" but the US delegation wasn't having any of it.
Toby Heaps : U.S. snubs Canada

The U.S. official said he didn't understand why the photograph was so important, to which Kelly replied "we were carpetbagged this morning by (environmental non-governmental organizations) with a false press release, I gotta change the story."

So much for Jim's airy dismissal of The Yes Men hoax.
But no big photo op transpired for Jim. Instead a staffer snapped the one above - a picture of a snub, distinctly lacking in the symbols of happy handshaking against a backdrop of COP15 logos.
And this even after Steve announced that given the integration of Canada's economy with that of the US, there was really not much point in Canada having an independent environmental position of our own.
Heaps : "It makes you wonder when the U.S. Secretary of Energy is embarrassed to have a public photograph taken with the Canadian Minister of the Environment."
.
Posted by Alison at 12:12 am
Email ThisBlogThis!Share to TwitterShare to FacebookShare to Pinterest
Labels: climate change, COP15, Copenhagen, Environment, Jim Prentice, snub

We got our sixth Fossil of the Day Award yesterday too.
There's rumours Harper will prorogue parliament again till after the Olympics so he can start all over, leaving the baggage of Copenhagen and the detainee transfers far behind him.

that's...I'm at a loss for words. These guys are so, so incompetent. They even suck at scamming. I'd be embarassed, but the good thing is the more they mess up like this in public, the more their incompetence is exposed.

U.S. energy policy has repeated the same nonsense for over 3 decades now. Who figured that things would break loose before the papers were signed at Copenhagen ?
I've blogged this for days...and it's unbelievable at first blush...so here we go...remembering this is only where I started...and I'm one guy out of many.

4 Dec - Following the Trail | Climate Fraud and En...
http://opitslinkfest.blogspot.com/2009/12/4-dec-following-trail-climate-fraud-and.html
Here's the search result that started me quipping with Dr. John v. Kampen, who I knew didn't think much of media reporting of climate science.

1975 'Endangered Atmosphere' Conference: Where the Global Warming Hoax Was Born

Rather gets your attention, doesn't it ?
A word of explanation here : I try to follow geopolitics and have found U.S. positions follow Framing Arguments much like you find on talk radio with Rush Limbaugh or Fox News.
( 'Moving the Overton Window' is the technical term. Another common reference is 'Moving the Goalposts'. If you hit an RSS Snapshot page you can zip to the index : see Perception Alterations under Collections Forwarded to Blogger. )
This one deals with the NPT : which I find works to abuse those trying to comply.
Global Warming is included in the mindbender.
So back to links I hit first, the YouTube talks by Dr. Ian Plimer.
That stuff is on the LinkFest! webpage and continues : I still run into items.
The big one, though, was when Global Research.ca posted its collection of articles a couple of days ago : a groundswell of debunking the representing a chaotic Open System comprised of many parts and subject to outside influences and cycles as a simple easily calculable circulatory system of planetary atmosphere alone : a 'theoretical model' not based in reality.