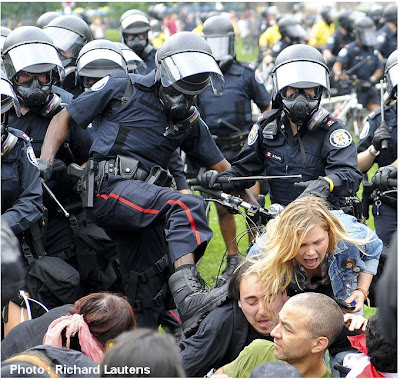 .
Further to yesterday's revelation that Toronto Police Chief Bill Blair knew the so-called five meter rule did not give him extra powers to violate Charter rights comes the revelation that the rank and file police performing the above actions on peaceful demonstrators also knew it :

By mid-afternoon Friday, [police spokesman Mark] Pugash said, police got new information informing them that, as both police and the province confirmed Tuesday, the regulation merely applied only to the area within the fence.

Police sent out a bulletin to police officers, Mr. Pugash said, but did not see a need to tell media or the public."

Which rather explains these officers' reluctance to cite that 5 meter rule when directly asked about it by the very people whose rights they were violating. 1000 odd arrests, the majority of them performed by police officers in full knowledge that what they were doing was both illegal and sanctioned by their superiors.
.
And now Blair announces there will be an internal inquiry? Fuck that. He has seriously compromised not only his own command but the integrity of the officers under him. Fire him.
.
Canadians Demanding a Public Inquiry into Toronto G20

.
Posted by Alison at 5:35 am
Email ThisBlogThis!Share to TwitterShare to FacebookShare to Pinterest
Labels: 5 meter rule, G20, police brutality

Fired at the very minimum. But what does it mean when you have 20 000 cops conciously enforcing a lie?

Could it possibly be that Chief Blair incited the cops under his command to commit illegal actions?

I'd find it very difficult to believe that the police chief would stick his neck out that far without someone 'above' backing him up...

an internal investigation? great! I bet the South American drug cartels, mafia and the Hell's Angels would love to have the same option.

"Did we do anything wrong and should we be prosecuted? Hmmm, well, we've thought about it and it turns out not only are we all innocent of any wrongdoing, but we think we deserve a pay raise...and free beer after every shift too"