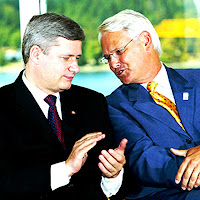 The popularity of Lotusland's estimable premier is currently running at 12%.
There are a lot of very good reasons for this but let's just go with what 83% of the people polled told Angus Reid : they don't trust the bastard.
Here's another reason, not that you'd know anything about it from reading our local press.
When Gordon Campbell was planning to mail out a plushy $780,000 pamphlet hawking the benefits of his new Harper Scam Tax to the same BC residents who were successfully gathering sufficient signatures to have that sucker repealed, Elections B.C. Deputy CEO Linda Johnson told him he couldn't do that. No advertising during the repeal drive, she wrote in her decision, because Elections BC is an independent office which covers referenda as well as elections.
Finangling Minister Colin "HST wasn't on my radar" Hansen was some pissed about that.
Meanwhile the chief electoral officer ended his term in June and Gordo appointed a temporary replacement, Craig James, formerly the clerk of committees, who immediately enraged everyone by not sending the HST repeal petition to committee until business groups could do a court challenge to it. Nice.
Now that same Craig James has fired Linda Johnson, 19 years the deputy chief electoral officer.
Ah, but it's not a firing, said some flack, they're just restructuring Elections BC without a deputy now.
Sure they are. Because what better time to fire the #2 person who has been deputy officer for 19 years than just three months after the #1 guy has left and just as a major confrontation on the HST is in the offing. And what the hell is a temporary Campbell-appointed CEO doing "restructuring" Elections BC anyway?
It would be good to hear something from Acting Chief Electoral Officer Craig James about this but unfortunately he is apparently away doing volunteer work somewhere for the moment.
Well, there'll be volunteer work aplenty after the recalls start.
.
thanx to RossK for the horrible pic. Yup, Gordo endorsed Steve's election.
.
Posted by Alison at 1:20 am
Email ThisBlogThis!Share to TwitterShare to FacebookShare to Pinterest
Labels: Elections BC, Gordon Campbell, HST, media

Jeebuz, Alison! If the local MSM would report this crap 'Ole Gordo could see his approval rating drop to the 5 or 6% range.