Kory, the NRA, and the long gun registry vote 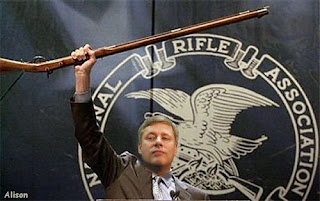 "We're having a debate on gun control right now in Canada on the long gun registry, a very hot debate. What if the NRA came into Canada with petitions and advertising campaigns, trying to influence Canadian policy and Canadian decisions? People would be outraged. People. would. be. outraged."

"If all goes well in the Canadian parliament, Dominion gun owners will be freed from 14 years of living under the crushing weight of a bureaucratic, scandal-ridden, wasteful, invasive, $2 billion, error-ridden and inarguably worthless long gun registry."
"The NRA of America supports and endorses the work done by the CILA [Canadian Institute for Legislative Action] and strongly encourages all Canadian firearms owners to become CILA supporting members."

"We have been working hand in hand with the NRA regarding international issues for the past three and a half years...in fact, the NRA was instrumental in the formation of CILA…the NRA provides CILA with tremendous amounts of logistic support."

In December, an NRA official was scheduled to offer a "legislative training workshop" at the annual meeting of CILA's parent organization.
"How do we protect our rights?" went the promo for the event. "By being more politically active and effective at the grassroots [level]. And who better to show us how than the most powerful lobby group in the world, the National Rifle Association and their Institute for Legislative Action."

"While Brant was working with Garry Breitkreuz, he acted as liaison with the CSSA on a variety of gun-related issues, including the long-gun registry. The CSSA worked with the MP's office on Bill C-301 and later Bill C-391," explains Bernardo."

Garry Breitkreuz is chair of Canada's parliamentary Public Safety and National Security Committee.
Back to the CBC :

Michael Bryant, formerly Ontario's attorney general, said the NRA has been agitating in Canadian political backrooms for years.
Canadians need to know the role the NRA has played in the gun registry debate, Bryant said.

"For a lot of people in Canada, if they knew that the NRA was part of the effort to get rid of the gun registry, they would think more about their views," he said.
"And they would think, 'well, wait a minute, I thought this was about, you know, wasting taxpayer dollars. The NRA's involved? Really? That makes me very uncomfortable … ' "

So. "Uncomfortable" or "outraged"? Your call, Kory.
.
G&M tonight : Tories deny NRA 'conspiracy theory'
.
Yep, I'll bet you're really really sorry now you reminded us of the NRA's reach into Canada, what with the Cons precious, the long gun registry vote, coming up on Sept 21st and all.
.
h/t Dammit Janet
.
Posted by Alison at 11:20 pm
Email ThisBlogThis!Share to TwitterShare to FacebookShare to Pinterest
Labels: Avaaz, Fox News North, Garry Breitkreuz, gun control, Kory Teneycke, NRA, sucking up to the US

The list of NDP supporters of this bogus Private Member's Bill is shrinking and with this latest twist, the last hold outs (I'm looking at you Niki Ashton and Jim Maloway) are going to look pretty stupid supporting Breitkreuz and the NRA.

The picture made me laugh till it hurt, and I would have loved to see your post mentioned on "Power&Politics", to wipe that smug, drunken smirk off Flanagan's face.

Alison, I shall love you for this work and all your fantastic work, until the day I die and may that be many, many, many years from now!!!