Prince of Pot's US prosecutor: "Our pot policy is dangerous and wrong" 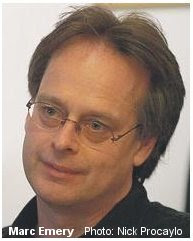 In a guest column in the Seattle Times last Friday, the former US attorney who indicted Marc Emery in 2005 for selling pot seeds over the internet wrote :

"The U.S. war against marijuana has failed and actually threatens public safety and rests on false medical assumptions. Our marijuana policy is dangerous and wrong .... the law has failed, the public is endangered, no one in law enforcement is talking about it and precious few policymakers will honestly face the soft-on-crime sound bite in their next elections."

This includes our own homegrown cowards, principally Minister of Justice and Attorney General of Canada Rob Nicholson, who had Marc Emery, a Canadian citizen, deported to the US in May to serve a five-year sentence that will begin next week.

As Lib MP Ujjal Dosanjh put it back in March when he joined forces with Con MP Scott Reid and NDP MP Libby Davies to present petitions from 12,000 Canadians in the HoC asking Justice Minister Rob Nicholson not to sign extradition papers :

"It appears to me that we have assisted a foreign government arrest a man for doing something that we wouldn't arrest him for doing in Canada."

The rhetoric from the DEA at the 2005 bust was absurd :

"Emery and his organization had been designated as one of the Attorney General's most wanted international drug trafficking organizational targets.

In a letter to his wife Jodie yesterday, Emery remarks on the importance of getting supporters to write to Public Safety Minister Vic Toews and the US DoJ for the Saturday Sept 18th Marc Emery Support Day. I don't care if you don't smoke pot - I don't smoke pot - but write a letter or support a rally on Sept.18th. I'll stick up a reminder then.

History, ironically aided by his former prosecutor, is already moving to vindicate Emery. Too bad he still has to serve the time so that Canada can continue to suck up to the phony US War on Drugs.

'Canada has to suck up to the phony U.S. War on Drugs'.
While I have evolved from 'my thoughts' that caution on public use of a substance which has the tendency to control pain and relax the user is reasonable - especially when dealing with a native weed which has useful functions in producing of rope and plastic substitutes while acting as a purifying agent for the soil - the farce is scarce restricted to this side of the puddle.
Only last year the science advisor to the minister responsible for public repression in the UK put his foot in it by announcing that the drug control program was dysfunctional...on the eve of an announcement that penalties were not sufficiently draconian.
Needless to say...his public profile suffered a quick takedown....and his job.
You'd think there was profit in feeding from the public purse in an expanded prison system. Hmmmm..

Wow. It's one thing for the DEA to enforce American drug laws regarding marijuana possession and distribution, but it seems to me quite another to strike a blow against the legalization movement which is a political movement. So it seems that the DEA not only has the authority, but trumpets it's success, in quashing legitimate democratic political and policy reform movements.

Welcome to Steven Harper's Canada, he was right, I don't recognise it. I don't recognise it at all. I don't know if you are already a regular, but check out BC Mary's website, http://rpc.blogrolling.com/redirect.php?r=a8e6ce463c1363702b68c2cf7112f6a3&url=http%3A%2F%2Fbctrialofbasi-virk.blogspot.com%2F

Kim's links :
The Legislature Raids, also found on blogroll below as The Ledge Trials, in which BC Mary has been covering the travesty of justice that is the Basi/Virk trial for the last seven years

and Oops, a Comox Valley news story in which a two week RCMP investigation, including aerial surveillance, culminated in the bust of two senior citizens in their home at 10:30 at night for growing tomatoes and dahlias.
Thanks, Kim.


Chris : Excellent point re the "war on drugs" blurring the lines between law enforcement and attacking a political reform movement.

See also Who muzzled the RCMP on Insite?

B.C. Mary didn't seem minded to kibitz with a stranger. Bit of a 'brush off'...though I think that usual from the attitude conveyed.
Oops I hadn't heard of.
But let's face it. None of that would compare to linkage of our boys financing institutional corruption via drugs...though the 'investigation' proceeds....at about the rate of the one on 'torture' I'm sure.
I ran an interesting Search a while back doing the usual detective work...'follow the money.' It may look outdated...but leopards don't change their spots.
http://opitslinkfest.blogspot.com/2010/08/26-august-oama-who.html
The authoritative source for much more current info would be either BradBlog for his introduction of ex-FBI interpreter Siebel Edmonds, or her blog or Tweets !