US senators visit their Defense Dept jet fuel in Alberta

Alberta Premier Ed Stelmach will be taking a tour of the tar sands today with three American senators, all members of the Senate Committee on Armed Services.
So while the good senators might be looking at this : 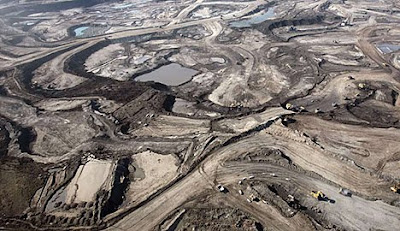 they will be seeing this : 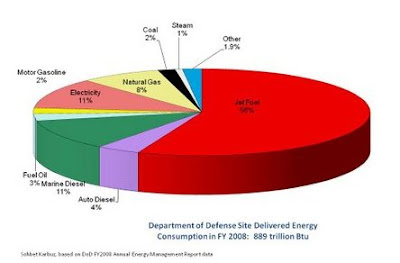 That fuzzy bit in the red portion that takes up well over half the US Department of Defense Energy Consumption pie chart says : "Jet Fuel".
Tar Sands Watch :

The U.S. Department of Defense is the world’s leading consumer of petroleum, sucking up about 340,000 barrels of oil every day, more than the total national consumption of Sweden or Switzerland.
The Pentagon is the single largest institutional buyer of oil in the world, consuming an estimated 85 percent of the U.S. Government’s use of oil.

Canada is the largest supplier of oil and refined products to the US at over 2 million barrels a day, nearly half of which comes from the tarsands.
.
Stelmach has been busy lately with his advertising campaign to persuade the world that Alberta's oilsands are clean and secure.
Here's a jingle suggestion for you, Ed : "Supplying jet fuel to the US military to bomb Afghanistan, Pakistan, and Iraq - it's what we do best."
.
.
Last night future Sun TV luminary Ezra Levant was on Alberta Prime Time touting his book "Ethical Oil", in which he argues that the oilsands are a superior ethical choice to using oil from human rights violating countries. The other guest was the remarkably unflappable Mike Hudema from Greenpeace who wasn't buying Ezra's bizarre moral equivalency.
It needn't be a false choice between two bad options, said Mike, at which point Ezra, who had introduced the country comparisons in the first place, accused Mike of equating Canada with Sudan.
.
Apparently undeterred at the prospect of being sued for libel by George Soros for misrepresenting Soros' Holocaust childhood to score points for Sun TV/Fox News North in his Sun editorial "George Schwartz, the Jewish Nazi", here is some of Ezrant's response to Mike last night :

You can watch it here if you must. Personally I can hardly wait for further arguments in support of the superior ethics of the tarsands from Ezra when Fox News North hits the airwaves.
.
Posted by Alison at 10:18 am
Email ThisBlogThis!Share to TwitterShare to FacebookShare to Pinterest
Labels: Ezra Levant, Fox News North, Greenpeace, military-industrial-government-media complex., oil sands, oilbidness, Stelmach, tarsands, US Defense Dept

Ah Ezra, always working tirelessly to raise the standards of the discourse.

I probably should have checked Creekside before I drew attention to the same Ezrorrhage. But wasn't it something!

I think I heard one of the senators on the CBC radio news a few minutes ago talking about tarsands oil being better than Middle East oil.

Video with a Senator BSing about reclamation (over pix of messy operations); talking about Sierra Club lawsuit to try to keep Defense Dept from buying tarsands oil. Want to wean off Middle East oil. Fears production in Iran could be interrupted (I bet!)

Your CBC link
Hey CBC, nice pictures of trucks. 10 year olds everywhere who watch CBC News are thrilled. Got any freakin aerial shots by any chance?

Boris : Yeah, I watched it last night. First time I've seen Ezra at length. What a putz.
No worries re posting/linking. Now that I seem to be posting in several places, I just log on to blogger and post in which ever place someone else hasn't in a bit.

Cliff : That's odd; Thwap doesn't much care for him either.

Well, Lady Alison, as I had never allowed myself to view the infamous levant creature it was time to check out his shtick.

Don't know if this one was typical or over the top, but I will never knowingly submit myself to such torture in the future.

Canadian media should not provide a soapbox for this life form to spew such mindless drivel and obvious performance art.