A new low for Canada in Afghanistan 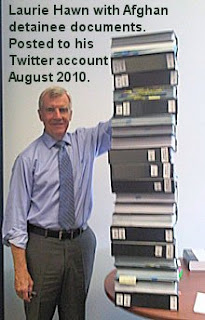 CBC : "The Canadian Forces have for years arrested children suspected of working with the Taliban and handed them over to [the NDS] an Afghan security unit accused of torture.

The document, obtained under an Access to Information request and marked "secret," shows that Defence Minister Peter MacKay was briefed on the topic of juvenile detainees in Afghanistan March 30."

"Approximately 110 children have been detained by the Afghan National Directorate of Security and international military forces on charges related to national security, including their alleged involvement or association with the Taliban or other armed groups. Access to detention facilities continues to be difficult and information on children detained by pro-Government forces remains limited.

The use of harsh interrogation techniques and forced confession of guilt by the Afghan Police and NDS was documented, including the use of electric shocks and beating. ... Available information points to sexual violence as a widespread phenomenon."

You can see how the Con/Lib/Bloc Afghan detainee panel - all sworn to secrecy and finally convened in July seven months after it was ordered in the House and charged with going through all those binders on detainees that Laurie Hawn is leaning on - is going to take a really really long time to get around to releasing any hint of this, if ever.

At which point, MacKay will probably issue one of his 'there was a problem but we already fixed it' missives and point out that Afghanistan is a sovereign country whose torture facilities are solely responsible for the treatment of the children we hand over to them. Especially as we now apparently actively solicit Canadian industry support for the CIA-backed NDS.

In the Afghan Committee on Oct 20, 2010, Parliamentary Secretary for National Defence Laurie Hawn remarked the NDS is "probably one of the better institutions in Afghanistan" and asked the Afghan ambassador if there was anything Canadian private industry could do to help them out.

The CIA and CSIS being what they are, you can expect that copies of surveillance tapes made of the torture of Afghan children and adolescents will surface.

If no one will charge those Canadians and US agencies with complicity in facilitating war crimes, perhaps individuals can be investigated and arrested for their role in the production and distribution of child p0rn0graphy.

Unless of course the Vatican Taliban is involved in the cover-up.

All along in Afghanistan, we've been "taking the lead" from the Americans - Geneva Conventions be damned - with regards to handing prisoners to local authorities, knowing well that they would be tortured (Americans did/keep doing it regularly in Iraq and Afghanistan).

The same goes with child soldiers - Omar Khadr as one obvious example. Because, how else would the soliders of a nation (re: USA) that considers it OK to prosecute children as adults for serious/violent crimes would view child soldiers, except as any other "regular" prisonners ... to be handed over to local authorities, or "interrogated", or made to stand before military tribunals?

Besides - don't the Harpies also espouse the view that children which commit serious/violent crimes deserve to be treated as adults - like the true Republicans (sorry - Conservatives) that they are?

Again: because the Americans do/did it, so do/did we as well.

And our own true Canadian principles and values be damned.