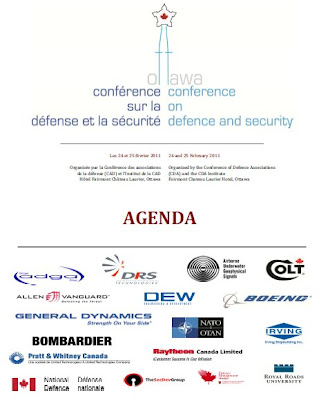 Up until it was taken down a couple of days ago, this was the front page for the 2011 Ottawa Conference on Defence and Security bunfest.
.
It was hosted by the Conference of Defence Associations, CDA Institute, described on their website as "a non-partisan, independent, and non-profit organization" ... aka a military lobby group primarily funded by the Department of National Defence.
.
I found it kind of touching - the way the logos of all the corporate defence contractors are laid out so boldly right under the word "AGENDA" like that.
.
Some highlights from the first panel group, moderated by CDA/CDFAI deep integrationist Colin Robertson, on loan from DFAIT to direct the Canada-US Project, to which the new SPP Harper Obama perimeter security blanket bears a singular resemblance.
Everyone was very bumfed up about the Harper Obama plan for armouring NAFTA :
.
Michael Wilson, former Canadian ambassador to the US and Nafta negotiator : "The definition of national security includes energy and the economy."
.
James Blanchard, former U.S. ambassador to Canada and Nafta negotiator :

"We hear the phrase ‘security trumps trade’ but the fact is energy security is part of security. To suggest they are separate and apart is a lot of baloney.
I don’t think the average person understands how closely we co-operate already on information and technology in the military or people would not be throwing around the word sovereignty so loosely."

"We’ve brought NORAD and NorthCom together - the Canadian and US staff below command level are fully integrated. The civil assistance program is already operational. Ready to help RCMP during the Olympics, we prepositioned forces south of the border – another example of the great cooperation we have with CanCom."

A question from the floor from retired diplomat John Noble : "BMD ... ballistic missile defence ...Is the door still open?"
Michael Wilson : "We should have joined the US in BMD. I hope discussions can be reopened."
.
.
Yesterday Janet Napolitano addressed the US Senate Committee "Department of Homeland Security Oversight" :

Canada Minister of Public Safety Vic Toews and DHS announced a first of its kind plan to establish a comprehensive cross-border approach to critical infrastructure resilience, focused on sharing information and assessing and managing joint risks.

Moreover, last month, President Obama and Prime Minister Harper signed a landmark "Shared Vision for Perimeter Security and Economic Competitiveness" that sets forth how our two countries will manage our shared homeland and economic security in the 21st century."

Our shared homeland and economic security?
A bit later on she mentions protecting "shared assets and key resources".
It's all about sharing evidently. Lots and lots of sharing.
.
This deep integration stuff has always been pitched to Canada as : After 9/11, we have to go security for the Americans so they'll continue to buy our stuff. Security vs. trade.
But there is no balancing of opposites going on here really, is there? There's just the one deal - markets and resources wrapped up in a big old homeland perimeter security blanket. With logos.
.
Posted by Alison at 6:09 am
Email ThisBlogThis!Share to TwitterShare to FacebookShare to Pinterest
Labels: armouring Nafta, BMD, Canada-US Project, CDA, CDFAI, corporate welfare, deep integration, DHS, Michael Wilson, NorthCom, security perimeter, SPP

Hey, nice to see you back; I started following your blog very shortly before you got sick. Hope you are healthy and happy!

And as far as this article goes... looking at the speakers and institutions involved, all I can say is birds of a feather flock together.

Seeing you posting again just made my week! Welcome back.

what Boris, West End, and Octo said!!!! Hope you are well.

The only part of this conference that got any mention in the media was MacKay's bullshit about the F35s.

Good to see you back. You were missed.

Great post. I haven't followed the security perimeter because our opposition is so lazy, and it's all i can do to try to chart whether they'll give us an election or not.

They're damned persistent, these continentalists. Damned liars too.

You're the best at pulling back the curtain on these so-called "negociations" and revealing what they really are.

Well, that's made my day--welcome back, and in fine form too, I see!

Just adding to the echo chamber:

Welcome back.
What a ghastly logo. Paralyzingly awkward. Looks like a sea-mine with a Canuck leaf, stuck on an ICBM or a shell casing. Woof. O awa, indeed.

Many thanks to all. Most kind.

Ed, about that CDA o awa logo. I'm guessing it's meant to be a wood tick on stilts.

Glad to see you back. I worried that we had lost an important voice for good.

Figures Manley would like ballistic missile defense. It's an endless source of big bucks for his buddies because it doesn't fucking work. How many of those corporate boards does he sit on?

I'd hate to cause a relapse but I've run across some interesting websites about NAWAPA; originally a US scheme in the 1950s-60s to move water from Canada to the US, never realised (though always still a possibility with the US drying out).

It's being pushed by Lyndon Larouche with megalomaniacal language and I don't know how significant it is now; but there is a fancy interactive map made in 2011.

I got the Larouche link from a website into AGW denial, DDT banning myths, etc, etc., which had a map on the right side.

I know the Alberta government had ideas and plans for decades about moving water from northern to southern Alberta, though never was crazy enough to try it, yet.

Holly! Already I get a new homework assignment?! ;-)
Will check them out tomorrow after work. Thanks muchly. Shades of Cellucci's giant water viaducts.

Chris : The exchange on bmd above was actually between Noble and Wilson, but yes Manley and the Canadian Council of Chief Executives of which he is now President have always been proponents of bmd - what Monbiot once called "the magic pudding that will never run out" - as just the price of doing business with the US. I think this is bs - it isn't an exchange of one for the other; they go habd in hand as a total corporate package.

Notable that many of the guys from the old Task Force on the Future of North America, which became the SPP, are now on Colin Robertson's Canada-US Project, which I fully expect to be the blueprint for Harper and Obama's new "Shared Vision".
Canada-US project : Ambassadors James Blanchard, Gordon Giffin, and David Wilkins, Senator Jerry Grafstein, Perrin Beatty CEO of Can Chamber of Commerce, Tom d’Aquino, Jack Granatstein, Pierre Marc Johnson, Michael Hart, David Bercuson, and Derek Burney. Link in text above.

D'oh! I meant Wilson.
But they're interchangeable aren't they?

Let me add my voice to the chorus of blog readers overjoyed to see you back at work!

Have you ever considered publishing with The Dominion / Media Coop? They could use a sharp mind such as yours on the Parliamentary beat ...

Glad to see you back in action

Great Blog!!! Thanks for sharing the experience with us...
Perimeter security