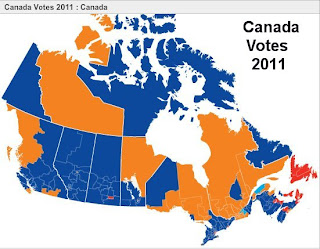 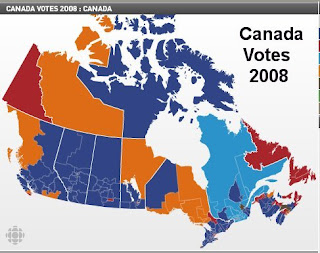 Just a 2% increase in the popular vote took the Cons from 143 seats in 2008 to a 167 seat majority tonight, thanks to our fucked up first-past-the-post system and because of what happened in key ridings in Ontario where presumably the Lib voters moved over to the Cons : ie. in Toronto, the Cons took 31 seats to the Libs 8 and the Dippers 12.
So the Libs and the Dippers change places in seat count compared to 2008, Elizabeth May finally gets a seat while Duceppe and Iggy lose theirs, and the Bloc, the only genuinely social democratic party in the country, is wiped out.
Consider this : Quebec's 59 seats has kept the Cons from an almost total lock on the country this time.
In 2008 the voter turnout was 59%; today it was 61%. So much for Get Out the Vote.
It will be interesting to see how Alice at Pundit's Guide breaks down the efficacy of the various strategic voting guides. In my own riding - West Vancouver-Sunshine Coast-Sea-to-Sky - the recommendation from Project Democracy, previously Vote for Environment in 2008, and other strategic voting sites was to vote Liberal. As it turned out, the Dipper came second to the winning Con who would have won anyway.
What hasn't changed since 2008?
60% of the 60% of Canadians who voted still did not vote for Harper, who has been allowed to govern as if he held a majority for five years already now.
.
CBC Interactive Results Map
.
Update : Alice is up: “Splits” Decisions: A Closer Look at Vote Shifts in Greater Toronto

It doesn't matter how you break it down. The 39% who didn't show up to vote did vote for Harper. they would've shown up to vote for someone else otherwise.

One can complain about first past the post. It's moot now. Election 41 will be the last one. No more elections.One of the first things Steve will change. And he can honestly say he has the will of Canadians to back him up.

As for me, I've given up. Harper will have a lock for the rest of his natural born life.

I'm with you, ck - nearly half of English Canada voted Con.

As a quebecer, I can say that we did what we had to do: We voted for Layton and expected the rest of the country to do the same, if only to prevent a conservative majority... Yet, that did not work out as expected.

The Harper majority is so dangerous that leaving Canada will now look as the only sane thing to do for Quebec... We tried to save Canada from itself, but sadly it seems we failed.

the Bloc, the only genuinely social democratic party in the country, is wiped out

'Ya reckon stevie will release the details on that "security perimeter" with the Excited States now, Lady Alison ? ? ? ?

We tried in BC. At least the Cons got fewer seats here than in the past. Just by one, I realize, but we did knock off Lunn by having all the non-Con voters working together.

It just... it just would have been nice if we could have said the same thing about Ontario. And I'm disappointed about Saskatchewan too.

Losing Duceppe and the Bloc is a tragedy.

The outcome of this election is a horror show.

I'm long overdue for a check-up so I guess I should make that a priority before privatized health care kicks in.

On a positive note, can't wait to see Evan Solomon, Rex Murphy and Don Cherry out of a job when they axe the CBC. Oh wait, scratch that. They'll probably land in the Senate.

Is there any interest in reforming our electoral system?

Here in Saskatchewan the NDP got a third of the popular vote but thanks to fpp - no seats at all.

Next door in Manitoba, NDP popular vote increased but number of seats was halved.

Calm down everyone and get off the frigging windowsill. If you can't find an opportunity in nearly every situation, you're not very imaginative. And if you can't handle an unjust reverse, you shouldn't be anywhere near politics.

It's rubbish to say that those who didn't vote voted for Harper. They voted for anyone who would have won. They simply didn't care.

Now, Harper is at least theoretically committed to a number of actions that will annoy to enrage a broad swath of Canadians. This with 60% of voters already thinking he's not fit for the job. If he privatizes health care, bans abortion, or bans gay marriage, he will never win another election in his life. And yet the considerable nutty fringe of his own party are committed to doing all those things and more, such as pissing off the First Nations. In his first term, he cannot be removed, true, but he can be hindered and handicapped. It should be a priority now to elect provincial governments that will cooperate with him as little as possible, for instance.

And he should be constantly reminded that although he won the election according to its rather odd rules, he doesn't and has never spoken for the majority of Canadians. Maybe we should nickname him Four of Ten. He is a tightly wound personality boiling with barely suppressed inner rages. Surely in four years someone can needle him into showing his true face -- either that or isolating himself from the press entirely, which doesn't look good at all.

Put your heads together. He's a petty, spiteful piece of work leading a party that has a large component of genuinely certifiable lunatics.

I have one post up already about the myth of "vote-splits" in the Greater Toronto ridings: the decline in Liberal vote in many parts of Toronto could as easily (and likely) have gone to the Conservatives who increased their vote share everywhere, as to the NDP.

I've got someone helping me collect the data on the strategic voting sites, and will do a full post-mortem in due course. Thanks for your interest.

Some Canadians say, we will be the USA's largest state.

I think we will belong to the giant corporations, Harper works for. Harper was nuts with a minority. With a majority he will be insane.