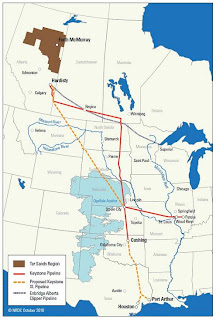 The Republicans on the US House Energy and Commerce Committee have drafted a "North American-Made Energy Security Act " (h/t Luiza Ch. Savage) - legislation which would ensure swift approval of the proposed $7-billion  2,000-mile Keystone XL pipeline from Hardisty, Alberta to the Texas gulf coast, doubling tarsands exports to the US to over a million barrels of oil a day .

"The draft legislation requires the president to issue a Presidential Permit decision no later than November 1, 2011."

An interesting thing about that House Energy and Commerce Committee :


"David and Charles Koch no longer sit outside Washington's political establishment, isolated by their uncompromising conservatism. Instead, they are now at the center of Republican power, a change most evident in the new makeup of the House Energy and Commerce Committee.

Wichita-based Koch Industries and its employees formed the largest single oil and gas donor to members of the panel, ahead of giants like Exxon Mobil ...

Nine of the 12 new Republicans on the panel signed a pledge distributed by a Koch-founded advocacy group — Americans for Prosperity — to oppose the Obama administration's proposal to regulate greenhouse gases. A top early goal: restricting the reach of the Environmental Protection Agency, which oversees the Kochs' core energy businesses."

What do Tea Party rallies, Republican victories, climate-change deniers, Wisconsin's anti-union push, and attacks on a cap-and-trade market for carbon emissions have in common?

They're all fueled in part by profits derived from Alberta, Canada's oil sands.

Charles and David Koch. Together, America's fifth-richest citizens - each worth $21.5 billion -- own Koch Industries, a refining, pipeline, chemical and paper conglomerate.

The company's website says it is "among Canada's largest crude oil purchasers, shippers and exporters."

Fun fact : "Koch Industries has had 300 oil spills (mostly from pipelines) in six states over a seven-year period."

Speaking at the White House presser in February, Stephen Harper plumped for the pipeline :


"Canada is the largest, the most secure, the most stable and the friendliest supplier of that most vital of all America's purchases: energy."

and tomorrow a TransCanada exec will address the House Energy and Commerce Subcommittee in support of the pipeline.

TransCanada's chief Washington lobbyist, Paul Elliott, as it happens, also served as national deputy director and chief of staff for delegate selection for Hillary Clinton's 2008 presidential campaign. Because the pipeline crosses the border, it will be Clinton who will decide whether to approve it.


So what's all this tarsands oil headed for the US in aid of anyway?


"Continued development of North American energy resources, including Canadian oil, increases domestic refiners' access to stable and reliable of crude and improves certainty of fuel supply for the Department of Defense, the largest consumer of petroleum in the United States." 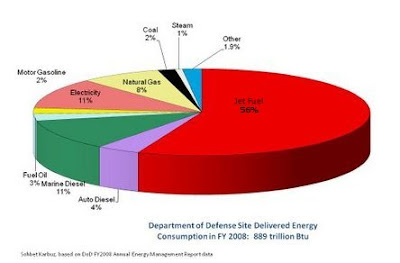 The environmental disaster that is the tarsands, the health hazards to First Nations downstream from them, the undermining of Canadian sovereignty, the danger to the Ogallala Aquifer pictured at the top, the tea party nonsense, the attacks on Obama and on a cap and trade market for carbon emissions, the gutting of the EPA, the buying of committees, the funding of rightwing thinktanks and climate change deniers ...

- all this so Koch Industries can make a buck off apes playing with firesticks.
.

Monday Update : Brave New Films vid on the Kochs and the Keystone XL pipeline up at DeSmogBlog today : US farmers calling on Secretary Clinton as their last faint hope to stop it.
Thanks to Holly Stick in comments.


"A Koch executive, in a statement Friday afternoon, reiterated that the company has “no financial interest” in the pipeline project ... “Given these facts, we are confused about why Koch is being singled out and inserted into these discussions,” said Philip Ellender, the company’s president for government and public affairs."

At the Energy and Commerce Committee hearing today, TransCanada President Alex Pourbaix responded to criticism that TransCanada had tried to "bully and intimidate" landowners to grant land easements along the Keystone XL route, even though their project has not even been approved yet.

"We treat our landowners with respect and we treat them fairly," Pourbaix said. "We have always viewed (eminent domain) as a last resort."

Wow. The expropriation of privately owned land without the property owner's consent is the prerogative of governments for the public good, not corporations.
.
Update : June 15 - Passed in committee ; July 20 - Listed in the House as "active bill"
.
Posted by Alison at 8:00 am
Email ThisBlogThis!Share to TwitterShare to FacebookShare to Pinterest
Labels: energy security, Environment, EPA, Keystone XL pipeline, Koch Industries, oil bidness, Stephen Harper, tarsands, tea party, US Defense Dept

Wow, you bring it all together so well.

Excellent post, Alison. I should have read here before posting at DJ.

Now how to tie Americans for Prosperity or one of their front groups with those election robocalls.

Thank you Alison, excellent as always. Wish you could get this out in the MSM.

Also a pertinent song. Via Eschaton.

Or could Jack Layton have success by framing the issue in those terms to counter Koch propaganda?

Resistance is futile...you will be assimilated.

It's precisely because this ties everything together so well that we will never see anything like it in the corporate media.

Ah! Beijing York, did I not write - Once more, go read Alison at Creekside: The North American-Made Energy Security Act?

But did you do as I bid you to?

Thanks, all, very generous of you.

Say, didn't Patrick Muttart say his pic of the Iggy lookalike posing in fatigues in Iraq also came from the US?

And do check out Chris' "pertinent song". Very good.

Linking to a video about the Kochs and Keystone XL pipeline:

Wow, Allison - you've made an incredibly complex mash of connections into a clear cogent piece! Brilliant work! Damn why won't the MSM just print your stuff & pay you whatever & be done with it. They'd actually be newspapers again maybe! Thanks so much! Sharing.

Thanks, CanNurse, but honestly, how long do you think I'd last? ;-)
MSM never names corps if they can help it.