The new face of Canadian diplomacy 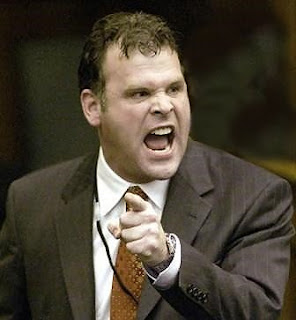 'OK, Pogge, I'll see you a "Now representing Canada on the world stage" and raise you a "New face of Canadian diplomacy".

The man who named his cat "Thatcher" is rumoured to be named today as our new Minister of Sucking Up to the US.

Tony Clement, formerly Minister of Gazebos, becomes President of the Treasury Board, where he will be in charge of cutting billions from federal spending.

Maxime Bernier, sometime Minister of Cleavage and Leaving State Secrets Lying Around, is the new Minister of State for Small Business and Tourism and Climate Change Skepticism.

And then after his morning presser on the new cabinet appointments, Steve announced three failed Con candidates, including two who quit the Senate to run in the last election, to his Senate of Unelectable Cons.
.
Posted by Alison at 5:16 am
Email ThisBlogThis!Share to TwitterShare to FacebookShare to Pinterest
Labels: Foreign Affairs, John Baird

Alison, you saved me the trouble, and used maybe the same headline and type of picture I would have selected for the announcement that Pit Bull Baird is (not rumour now as we all know) now the face of Canada. It is difficult to imagine anyone in all of Parliament, less "diplomatic" and less qualified to represent a reasonable nation, you know a nation like Canada used to be, before it became HarperLand.

The only better suggestion I had would have been The Hairpiece that decided to pass on the US Presidency, even though it was in the bag (according to his Trumpness, if he chose to go for it). Of course the Donald isn't even a member of Parliament, nor is he even a Canadian - but he knows foreign relations - you just tell everybody else in the world what to do, and take no shit, as in "Shut the Eff up and give us your, well actually OUR, oil MF!"

What's up Alison, I left a comment, it published and now it's gone? I don't think I said anything offensive!

Well, unless Mr. Baird is your moderator, that is!

What an excellent way to demonstrate to the world that Canada is no longer the country they used to know. And respect.

Don't expect Angry Man to last very long. He'll spring a bearing when he finds out that most of the world is neither white nor Christian and doesn't give a fuck what he thinks.

Wonder who the pit bull is gonna drool over like petey did over condescending rice? Perhaps a bowl of raw meat?

With him romping about the world being the face (ugh!) of Canada, who will laureen get to accompany her to all the galas ? ? ? ?

Dunno why you get "moderated" into the blogger spam filter, Koot - it's certainly not by me I can assure you. Perhaps you were commenting while I was updating and they clashed ... but it has happened before, hasn't it?

Chris, Bob : Ottawa insiders like Kady were at pains last night to assure that Blared is really "a pussycat", a gentleman just playing a role, and was voted the most popular MP in Parliament.

Well you know sometimes, as Kurt Vonnegut once reminded us, you are what you pretend to be and Baird has made a pigsty of parliament and committees - there's no pretending about that.